Dhor Valley is a beautiful rural settlement nearly 14 kilometers from Gwadar. The valley has a population of 3,000 to 4,000 people, most of them engaged in making salt from the water of a saltwater lake nearby. Some also cultivate small tracts of land and go fishing to earn their bread.

Now, the government is bent upon evacuating this entire populace. They are being offered lucrative prices for their lands and have been told that the purchased land will be conjoined with Gwadar Port and turned into Railway Yard. A portion of the land will also become a part of the Gwadar Express Road, yet to be constructed with the help of the Chinese government.

So Dhor Valley residents have been asked to get paid for their land and just leave. These residents are not against the mega development projects currently being pursued by the government. However, they have valid grievances that being evacuated all of a sudden without being provided alternative settlements and employment opportunities is going to wreck their lives. They say that government is ready to pay them handsomely for their land, but if no alternate settlement is provided, people will scatter and lose all their social and societal relations.

When I reached the scenic saltwater lake in Dhor Valley, I met a local resident Chacha Hussain. Hussain was sitting on the edge of a well, drawing saltwater from it and pouring it into several fields. The water would then be allowed to dry in these small portions, ultimately leaving salt as a residue. As I talked to Hussain, he told me, “Our ancestors have been doing this work for centuries. Once there were hundreds of such saltwater wells but today only a mere 20 are left. Most people have found other jobs, some for instance go to sea to hunt fish.”

Despite a steady decline in the local salt-water industry, Hussain says that more than 300 people still work on the wells and the fields to make pure, white salt. The saltwater lake is the lifeline of all these engaged in salt-making. I asked Hussain about the lake itself and he said that the lake is 2 kilometers long and nearly 500 meters across, and that it was fairly deep at many places. He told me that during every winters, migratory birds from different parts of the world arrive here, who then fly back as summers arrive.

According to Hussain, he has been engaged in the trade for the last 50 years. The salt, once its dried and ready, is packed into sacks weighing 100 kilogram each and sold to market traders for 150 rupees per sack. The traders then take the salt to the market, selling it for as high as 800 to 1000 rupees per sack. Still, Hussain says that his people are able to make nearly 400,000 to 500,000 rupees per year from salt-making. However, he fears that being evacuated and displaced by the government will leave these people unemployed. He says that while the government claims to be helping the locals, it has failed to provide a clear roadmap as to the employment and settlement opportunities, if any, that it will provide once people agree to evacuate.

I spotted another laborer packing dried salt into sacks and I struck up a conversation with him. He told me his name is Imetan Baloch and that his ancestors have been engaged in the salt-making trade as well. He, however, also has a day-job where he works at a dispensary.

Speaking about salt-making, Imetan says that it takes nearly six days to dry one bout of water and extract salt from it during the summers. In winters, however, it can take as long as 10 to 15 days to complete the process.

I asked him if the saltwater has any adverse affects for those working in it. According to him, most of the times saltwater is more beneficial than harmful, often healing scratches and wounds when exposed to it. However, people who work with saltwater all their lives tend to develop eye complications as they grow old.

When I asked exactly what did the local population want from the government, a local resident Khuda Bakhsh Baloch aptly summed it up, “We demand from the government to give us labor jobs at the Gwadar Civic Center and Sui Southern Company office, both located nearby. And that we be provided a village somewhere near this place where the provincial government should ensure the construction of roads, markets, schools, hospitals, sewerage system, and provide clean water and electric supply.”

Bakhsh says that unless the government addresses these demands and tries to fulfill them, the grievances of the locals will not go away. “We are laborers, most of us. But we want our kids to have education so that they can have a bright future. Government must ensure this.”

The government is paying the residents for their land in order to ensure a fair evacuation, which is good from a purely business standpoint. But it is also the direct responsibility of the government, as government, to provide these citizens with alternate settlements, employment and other opportunities. If we are to hope for any sustainable economic prosperity in the region, government must start by offering that hope to the locals. 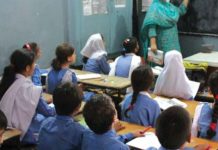