Home Governance 150,000 Pasni Residents Have No Doctors, No Health Facilities

Pasni has a population of nearly 100,000. And if we count the peripheral areas near Pasni, it goes as high as 150,000. For a town this size and a population this size, the health facilities available in Pasni are unbelievably abysmal.

When the residents of Pasni are in need of any serious medical help, they have to head out to Turbat, Gwadar or Karachi. From Pasni, it is 116 kilometers to Turbat, 131 kilometers to Gwadar and nearly 600 kilometers to Karachi. So while the local population has no access to any significant health facilities, they have to spend money and a lot of time to reach towns where suitable help could be had. In urgent cases, it often proves fatal.

When I spoke to the Medical Technician at Pasni Rural Health Center (RHC), he said that there is are local civil dispensaries at Pasht, Babr, Char, Faqeerabad and Hari Belar, areas in and near Pasni. He said that there is also a Basic Health Center at Kufr, Ban Belar, Bil Hadomi, Kocha and Kalag. However, there are no doctors in any of these establishments, neither are even the most basic health aid available in them. In simpler words, he says, these are just buildings and names which offer absolutely no respite to the health woes of the Pasni population.

I then briefly interviewed the Vaccinator at Pasni RHC. According to him, there is one freezer available in RHC to store vaccines, and whenever power fails, there is a risk of vaccines going to waste due to heat. He says that a deep freezer is also available in RHC which would be more suited for storing vaccines, but the Assistant District Health Officer (ADHO) does not permit the use of the deep freezer.

He further said that RHC has a power generator which could help, but it sits idle because of the non-availability of fuel. Similarly, the establishment also has an ambulance but it is dysfunctional because of no fuel. If any patient urgently requires an ambulance, he must first make provide fuel to get it running. According to him, RHC lacks basic equipment and medicine such as Paracetamol, so to expect the Center to have life-saving medicine is hopeless.

The X-ray Assistant at RHC, Yusuf Mair, severely castigated the ADHO and District Medical Officer (DMO) in his remarks. He says that there are no arrangements for X-ray in the Center and the X-ray machine has been deliberately misplaced. According to him, RHC offered support for procedures such as blood transfusion 15 years ago, but today the place even lacks X-ray machinery. He pins the blame on the lack of resources and corruption. In his opinion, a mere 5% of any funds that come from the government or a non-governmental organizations are expended on the upkeep of RHC which the rest of the 95% go into the pockets of officials.

Mair also bemoans the professional neglect of doctors and hired staff at RHC. A dental surgeon, for instance, was recently posted at RHC but he runs a private practice in Gwadar and never visits the hospital. He added that the entire lower staff of RHC comprises of a single sweeper.

Zareef Baloch is a journalist from Pasni and he is equally pessimistic about health facilities in the area. According to him, a medicinal quota for Pasni was established years ago under which, non-governmental organizations such as ‘Save The Children’ provide medicines at RHCs and BHCs in the area. This is done in agreement with the government. However, he says, the population has increased substantially since, the allocated quota is utterly insufficient and without many other key health facilities, a handful of basic medicines does little to help.

Baloch also refers to a near-complete hospital in Pasni, being constructed with a grant from the Omani government. ‘It will be a 30-bed hospital and may finally provide some genuine health facilities to the residents of Pasni. Then again, it all depends on how sincere and honest the management of the hospital is.’

Pasni has 5 private clinics. Four of these are run by current government officials, doctors appointed at RHC who are rarely inclined to visit the Center. But even the private clinics are clinics in name alone and are so ill-equipped that nowhere in Pasni can a medical operation be conducted or a blood transfusion procedure be done. The hapless patients then have to rush to cities and towns hundreds of kilometers away whenever medical assistance is required. This has resulted in the loss of many lives and will continue to take a toll of yet more lives which could be and can be saved with timely medical help.

It is upon the government, then, to address the plight of its citizens and help save these lives. Pakistan plans to turn Gwadar into a Dubai of future but areas like Pasni in the neighborhood of Gwadar look like medieval towns when it comes to some of the most basic modern-day amenities. Will the government change this or keep looking towards foreign messiahs to help solve the problems at home? 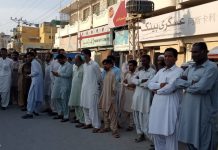