Mehar Baloch is the first female singer from the coastal region of Balochistan to have produced her music album which was released a few months back as some of her songs also made it to the Balochi films. She has been recognized for her singing talent and melodious voice across the province.

Like every other woman from a conservative society, her journey to success has been riddled with obstacles and setbacks. Fortunately, she enjoyed her father’s support but her mother does not approve of her profession as a singer.

To Mehar’s dismay, ever her friends discouraged her from appearing as a professional singer. She tells Pak Voices that they did not consider it appropriate for a woman to air her voice in a way that will gain improper attention from thousands of listeners. 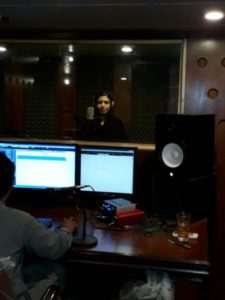 In Baloch society, women are confined to certain professions where they have minimal interaction with the male counterparts and less exposure to the outer world.

However, her father’s staunch support gave her enough courage to defy the societal norms which have been defined by men.

Her father could see in his daughter a talent for singing since her early school days when she was the star performer in her every school function.

“I made this resolution long time back that I will not allow anything to deter me from showing off my singing talent to the world. Women possess tremendous talent in every field and are extremely capable but unfortunately, they are so badly discouraged from early on that they lose faith in themselves.”

Meher is also associated with a teaching profession for some years and currently teaches in a private school in Gwadar. Considering the lack of opportunities for singers in Balochistan, she has chosen teaching as her primary profession for a much stable future.

Meher graduated with a college degree in 2017, the same year when her first music album was released. With her interest in music and singing, she hasn’t compromised on her educational pursuits.

While talking about her inspirations, she said that she has always been impressed with Ustad Asim Baloch, a Baloch language singer; and Latta Mangeshkar and Suresh Raina amongst Urdu language singers.

Despite the social and cultural hurdles and scarce opportunities for singers, she is ready to break all the barriers and aims to make her name as a successful singer.

“Women should not depend and become a burden on their male family members, rather recognize their worth and how they can contribute economically while standing shoulder to shoulder with their fathers, brothers, and husbands,” said Mehar while sending a strong message to women.

Balach Qadir is working with Pak Voices as a citizen journalist from Gwadar.