Maryam Keerio said to be ‘the queen of gymnasts’ was born in a very traditional family in a backward village of Rai Pur in Khairpur Mirs of Sindh province. No one could imagine that a girl from such a background would ever become a world-class gymnast.

To her credit, she has won many gold medals at national games and represented Pakistan at international games as well such as King’s Cup World Championships in Bangkok and Srilanka.

Her father had developed a love for gymnastics over the years and wanted one of his children to excel in the field. In traditional Sindhi culture, the women are restricted to household and are protected under a strict code of honor by male guardians.

Anyone who trespasses is bound to suffer. Her father though uneducated, took the risk and introduced his daughter to gymnastics. He wanted Maryam to follow the footsteps of Nadia Comaneci, the famous Rumanian gymnast.

Maryam started training at home at the age of 5 at her father’s will. It was something new for the family, the village and the area. Maryam and her father were berated and censured by her relatives, including her uncles, brothers, elderlies and even other women. However, her father kept to his dream and despite poverty, supported Maryam in every way.

Soon she joined gymnasium to get proper training to become a professional gymnast. Maryam’s three elder sisters were married at the age of 12 and 13, which is a common practice in Sindhi Culture. The girls are not even supposed to attend school let alone playing games in front of crowds.

Now Maryam spends most of her time training the young school and college girls in the art of gymnasium. She has also felt a visible change in the attitudes of people as they encourage their girls more and more to become a gymnast.

Maryam’s hard work and rough journey against traditions won her a place in national training camp for gymnasts established by the former Prime Minister Benazir Bhutto in 1996. Only girls from Punjab and Sindh participated in the camp.

Balochistan and KP people boycotted the camp dubbing it against their cultures. From this camp, the gymnasts were selected for Second Women World Islamic Games in Iran in 1997.

This was the first time Pakistani female gymnasts were participating in any event outside the country. Unfortunately, the female participation won the ire of the hardliners and extremists. They protested and asked the games to be banned for women in Pakistan taking it to be a matter of honor and pride. As a result, there were no games for women in 1998 and 1999.

Despite games being banned and no event in sight in near future, Maryam continued her practice. Finally, gymnastics for girls were arranged in the National Games in 1999. Teams from various departments attended these games and once again the gymnasiums were populated with girls.

Maryam was an eminent player in 2002 Sindh games and won 4 gold medals. In the same year, she participated in Inter-department and Inter-University games. She was honored with the title’ “queen of gymnasts”.

Due to unfortunate circumstances in the country, once again there were no gymnast games for 3 years and the gymnasiums were deserted. However once again by the efforts of Mrs. Yasmeen Iqbal Qureshi, a professor of sports sciences at Sindh University, gymnasiums were repopulated and games restored. 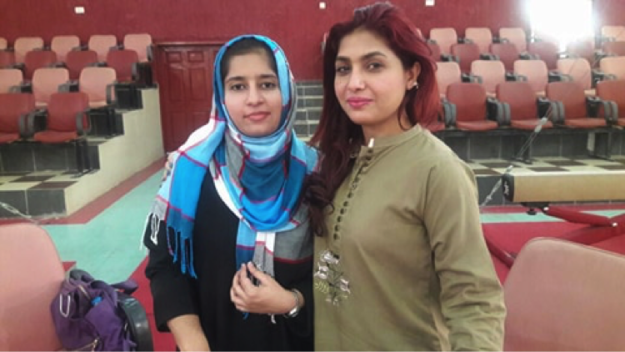 In 2007 Maryam represented Pakistan in World Uniset games held in Bangkok, Thailand. She has been always active in local games competitions and has represented various departments.

Maryam, now a mother of three children, has also faced really tough times during her career as a gymnast. She was abandoned by her family, mobbed by her relatives, and deserted by her husband.

As a single parent, she has gone broke on several occasions. Once she had to withdraw her children from school as she didn’t have money to pay their fees.

Maryam’s message to the women is, “never get disappointed and never feel weak. When you feel yourself weak think to boost yourself, make yourself strong.”

She ends our conversation on this optimistic note for any woman, “You can do anything as nothing is impossible.”

Aqsa Nizamani is working with Pak Voices as a citizen journalist from Hyderabad.