Bahawalpur: A man attempted self-immolation after being defrauded of his money in Ghalla Mandi, Bahawalpur. Arif was quickly rescued by the people around as he struck up a match after dowsing himself in petrol. Due to the timely interception, he avoided any serious injury and was discharged from the Victoria Hospital after first aid.

According to Arif, he handed over 1.5 million ruppees to a man named Nafees. It is a common practice in Ghalla Mandi to forge oral agreements without putting them down in writing. Arif had a similar agreement with Nafees who, in turn, hasn’t paid back anything since 3 years. The Mandi President was apparently informed of the situation and he decided that Arif be paid back 33,000 rupees per month. The decision was devastating for Arif who says that he’s been waiting for his money since 3 years and can’t wait another four. He also said that if his money is not returned in full sum soon, he and his family will commit self-immolation. 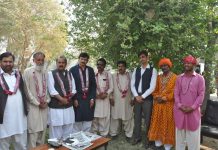