Cultural and religious tolerance had been the epitome of all Sufi saints and the poets historically lived in Punjab. The Sufi tradition called for a co-existence among the divergent sects, but today’s South Punjab is an exception. Discrimination towards other minorities and a rife sectarian strife is becoming a hallmark of South Punjab’s social landscape. Growing intolerance in this region is both sectarian and towards minorities as well.

With extreme poverty and non-development, this region is serving as a breeding ground for radicalism in Pakistan.

This region stands as the most impoverished region. With least developed economic structure and negligible infrastructural development, it remained underdeveloped and underserviced. The scanty allocation of resources and a non-integration into the mainstream, the South Punjab presents a horrifying picture.

The non-availability of basic resources and a below par standard of life, the majority of the population in this region is coping up with a miserable sociopolitical fabric.

The state of minorities in Pakistan and South Punjab in particular is abysmal. Minorities are subjected to the worst of systematic marginalization. This act of marginalization is both legal and institutional.

They are not treated as equal citizens and so is the case with their employment where they are inly considered for low standard jobs. The constitution of Pakistan which guarantees equal treatment to all the citizens does not fully apply on the minorities who are considered B class citizens.

It is noteworthy to mention that Pakistan was achieved at the name of minorities where Muslims being a minority perceived their interests jeopardized by the majority.

The minority population in South Punjab is settled primarily in five districts. They are Rahim Yar Khan, Muzaffargarh, Khanewal, Multan and Layyah. The estimated population of the minorities in these districts is 0.25 million.

The first and the foremost discrimination starts with the flawed registration method where minorities are not facilitated. The registration of the marriages is also a big question for the minorities.

Hindus are unable to register their marriages due to the absence of formal law and codifying requirements. Recently Sindh assembly passed a law regarding the registration of Hindu marriages but that is still far away from implementation. The majority of minority population in this region is Hindus and rest are Christians and other minorities.

Amid the worst discrimination and persecution the minorities in this region are forced to convert to Islam. No Muslim women are also targeted and are at times kidnapped to convert to Islam. The worst aspect in this regard is that this all nuisance to the minorities is getting done in the guise of virtue and Love jihad. Non-Muslim women are targeted and are brainwashed and are forced to marry a Muslim man and convert their religion.

Reports released by minority rights commission also speak volume of the deteriorating state of affairs of minorities in Pakistan. The failure of registration process is leading to severe consequences for the minorities in South Punjab.

Due to the absence of the birth certificates amid a flawed registration method, the minorities are denied admission in schools and other educational institutions.

The minority commission report of 2012 revealed a horrifying fact that due to the absence of computerized national identity cards, 150,000 Non-Muslim population have been unable to register their kids for secondary level examination since 2001.

The fake accusation of blasphemy and desecration are weapons that are used against the minorities and this trend is on increase with every passing year. This has instilled a perpetuated fear in the minds and hearts of minorities living in this region. They can be charged with blasphemy anytime and no legal and constitutional mechanism is there to safeguard them against this serious charge.

The legal and constitutional cover of Article 295-C is impinging minorities with worst of the reverberations. Asia Bibi case and subsequent killing of former governor Punjab Salman Taseer is also a vindication of this fact. The exigent registration of FIR against minorities against the complaint of blasphemy and desecration and no legal proceeding afterward lead to languishing in jail for almost entire life.

In 1997 in a village of Khanewal named Shantinagar 900 houses of the minorities were put under arson over the alleged charges of the desecration of Holy Quran.

The other social discrimination which minorities are witnessing is their forced expulsions from their own lands. The land grabbers and the influential mafias are depriving them of their agricultural lands which they have possessed over the decades.

For instance, in Muzaffargarh thousands of acres have been snatched from the Christian families. In Multan Hindus have lost their ancestral graveyard to the land mafia. The report of 2012 revealed that Auqaf department collects the revenues of millions from the Hindu sites but hardly spends a penny on them instead this money is spent on the Muslim population.

The job quota of minorities is also restricted and if it is there it is not conferred to them. They are only considered for low standard jobs. This is the high time when the state of Pakistan should fulfill its commitment explicitly made by Jinnah in his first speech and the guarantee which was given to the minorities in the constitution of 1973.

Government should make a comprehensive policy regarding minorities ensuring their autonomous existence, protection and integration into the mainstream. Mere lip services to the cause of minorities is not likely to the change the exploitative structure minorities are embedded in.

About Author: Raja Qaiser Ahmed is a lecturer in the School of Politics and IR, Quaid-e-Azam University, Islamabad. 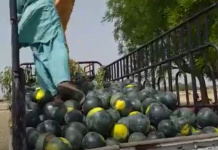 The plight of farmers in Cholistan