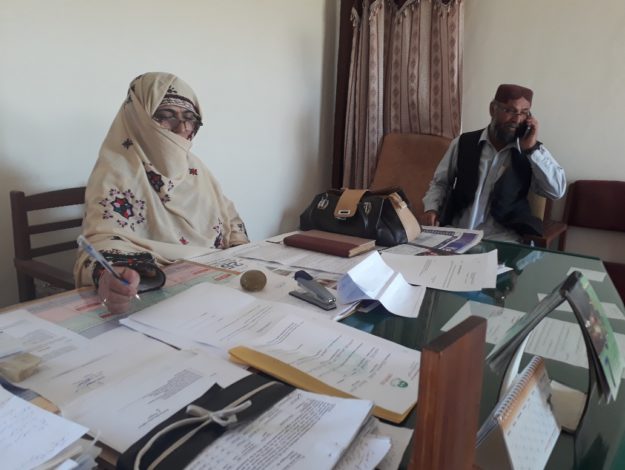 The top education officer Panjgurr, Sabeeha Khaanam, is a trailblazer for women in her district. She has served as the District Education Officer (DEO) for the last five years. She is the only wom\a\\n of the district to rise to such a senior level in any department. An officer of grade 20, she is striving for the cause of education in the under the developed district.

Khanam hails from Khudabadan, Panjgur and comes from a middle-class family with average educational background. She completed her school education from Quetta in 1978 and started studying as a private student.

After she completed her intermediate degree, she was selected as a Junior English Teacher in 1981. She kept on studying until she completed her MA and Med. She earned promotions to Senior School Teacher, Head Mistress and now as DEO.

Khanam in an interview related her story to Pak Voices, saying, “When my father got me enlisted in school, people started a smear campaign against him as it was an act against the established norms of tribal society.”

“During those days, it was highly insulting for girls to be seen outside their homes let alone attending school regularly. My father indeed faced a lot of troubles for sending me to school. There were threats and boycotts.”

She continued, “But we did not give in to the pressure from our relatives and society and I earned the status of the first educated woman of the area.”

“Now I am serving as a senior and pivotal post in the education department.”

Due to her hard work in uplifting the education sector of Punjgur, some provincial level officers of the department have even hinted that she may be given a higher post in the provincial department this year.

On the occasion of International Women’s Day on March 8, she said, “Women should not be disappointed by troubles and obstacles and they can rise to prominence by working hard and play their role in the advancement of our society.”

Rafique Chakar is working with Pak Voices as a citizen journalist from Punjgur district of Makran in Balochistan.