Gulaban the first Female Thari dumper driver has become a role model for Thari women by driving a 60-tonne loader Dumper at Thar Coal Project. She continues to inspire other women of Thar Desert to join her struggle for the emancipation of women.

So far 30 women have been selected for training as a dump truck driver after the screening process. Lata Bheel the 19 years old girl is also one of the trainees. She is from Nangarparker: southern region of bordering area of Tharparkar district. She is the most educated of all women drivers.

Lata has become a courageous driver in a short time and she says she draws inspiration from Gulaban who is leading the way to empower women in a unique way. No one would think that the women of the desert would drive heavy dumper defying all odds.

When Pak Voices asked Lata Bheel about her driving career, she explained, “I am more educated than rest of my fellows, and only my study enabled me to take part in the training and convince my parents to allow me to be a dumper driver.”

She continued, “If women from Tharparkar are engaged in fields, harvesting their crops and doing chores of housewives as well then surely they can drive a jeep and a dumper too.”

Acknowledging the struggle of her mentor, here is what Lata had to say about her mentor, Gulaban: “I was very much inspired by Gulaban as she has emerged as a symbol of hope and struggle for all women.”

Lata further says, “We face a language barrier during our training. Gulaban’s driving skills could come handy as she can teach us in our own language and that will provide a boost to our training.”

Pak Voices talked to Gulaban to know her experience as a heavy transport vehicle driver. She told us, “Before joining the Thari Female Dumper Drivers Program by Engro Coal Mining Company, I was working as a jeep driver. My husband taught me how to drive a jeep.”

She continued, “I used to carry tourist to various places of Thar. While my husband was training me, people used to make fun of me and laugh at my driving style. But I didn’t get discouraged by their taunts and at times derogatory remarks. Now I am a perfect heavy transport vehicle driver.”

She further adds, “It was a sound opportunity for me to use my skills and make a living out of it. Getting a driver’s license was not less than a gift from God for me. Now people appreciate my efforts.” 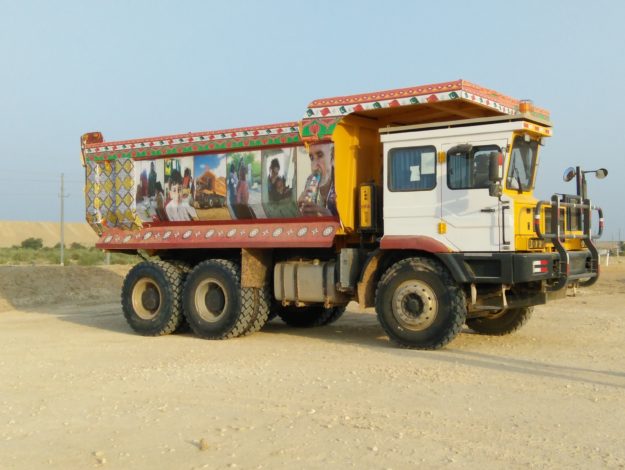 Jahan Ara, the project lead, says, “Hailing from a remote and backward area of Sindh, the women participants are not less than a shocker. They have broken all the barriers. They are working for the prosperity of their homeland, Thar and Pakistan.”

Sanjay Mathrani is working with Pak Voices as a citizen journalist from Hyderabad with focus on Thar related issues.