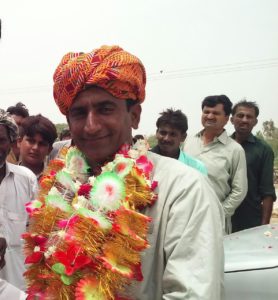 Phelaj Kohli, a son of a peasant, is contesting elections as an independent candidate from the PS-50 from Mirpurkhas district of Sindh province. He is challenging the feudal system during his campaign trail with the aim to improve the life of a common man or a farmer.

Kohli is among the few minority persons from the Hindu community who are contesting elections this time around.

He is also the first graduate in his family as he passed his BA from Tando Jan Muhammad College.

He is enjoying the support of Kohli clan in the area as he is raising a voice for resolving their nagging issues. A big rally was held in his support in Tulaka Digri in which a large number of people particularly the youth participated.

Phelaj Kohli, 38, belonged to Tharparkar district but his parents left the desert area for Mirpurkhas in search of water when he was just four years old. Kohli’s priority is to resolve the water crisis which has been forcing the desert people to relocate for a long time but the elected members have done almost nothing to find a solution to the problem.

While talking to Pak Voices, he said, “the conventional politicians have neglected the problems facing the local farmers.”

He continued, “for the current mess in our province, the feudal system is responsible which we need to change by electing a common man from among us.”

Phelaj Kohli has an uphill task to contest the elections against the candidates of established mainstream political parties.

Kohli says that he has also been pressured by the opposition candidates to withdraw from PS-50 but he has refused to do so because of his faith in the power of a common man instead of feudal system, “the system will continue to suck people if we don’t take a stand now.”