Home Culture Okara: A transgender fights on despite facing discrimination on the campaign 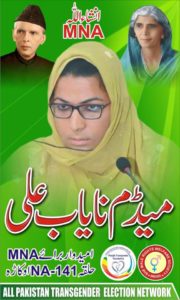 Nayab Ali, 26, a transgender and social activist, is contesting from NA 142 constituency of Okara on the ticket of Pakistan Tehreek-e-Insaf  Gulalai (PTI-G).

A teacher by profession, Nayab has been active in social causes in her area particularly for the upliftment of her own marginalized community. She is known for her voluntary social work in her area and she is also a member of the “Transgender Rights Activist” and “All Pakistan Transgender Election Network Punjab”.

The name of Nayab Ali in National Identity Card is Muhammad Arsalan and the gender is specified as ‘X’. She has been named as Nayab by her guru Afzal Arif with whom she has been living since she was just eight years old as she was not accepted by her own family.

She completed her FSc Pre-Medical in 2010 and BSc Honor Botany in 2014 from the University of Punjab and she says that all of this was made possible due to the efforts of her guru.

She believes that by contesting in the upcoming general elections, she will represent the transgender community and will be able to voice the ground issues faced by the community as the transgender issues are not well understood by other genders who dominate the parliament and policy-making circles.

While talking to Pak Voices, she said, “a proper legislation should be adopted for the community and that can be possible only when a representative of the trans community is in the parliament to raise the voice for their genuine issues.”

Nayab also talked about the taunts she is facing while campaigning for her election, “whenever I’m going out for the election campaign,  many people make fun of me as if I can’t contest or win the elections.  But I ignore such taunts and try to focus on my work,” adding that in order to achieve something one has to go through many hardships.

Nayab said that none of the mainstream political parties gave her the party ticket because of two reasons: Firstly she is from the transgender community and secondly, her financial position was not that strong to buy votes.

She said that she has done a lot of social work in the community due to which the people of the constituency including the trans community are supportive of her election.

Nayab had also requested the caretaker government to provide her the required security as she alleged,  ” my opponents from PTI, PML-N and independent candidate from the same constituency are threatening me and asking me to withdraw my election campaign.”

Nayab ended our conversation on an optimistic note with a resolve to find solutions of the issues if elected saying, “If I emerge victorious in the upcoming elections, I will build a medical university for the people of her constituency and will work to solve problems related to education, health, clean water and unemployment.