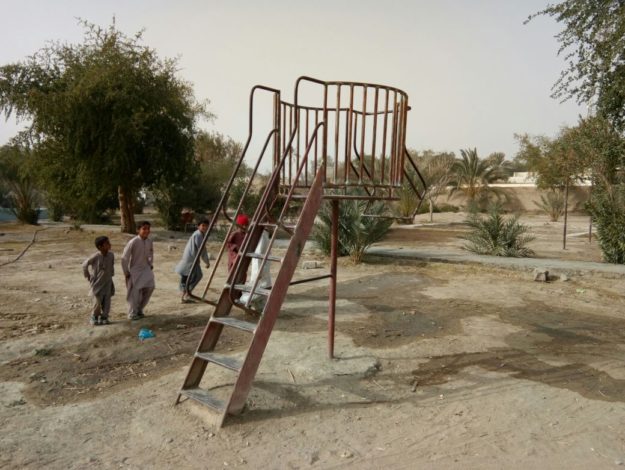 The district government of Panjgur has finally restored residents’ access to the city’s only public park after a long wait. The only park for a population of 400,000 people had been closed for past few months for the public, outsourcing it by the city government to a local contractor for the commercial use.

After Pak Voices published a feature article on abuse of public property by the district government last year in April, the administration took note of the situation and dedicated the park for public use only.

The municipal administration has devoted a budget of 500,000 rupees for repair and maintenance of the park. In the first phase, the park is being repaired to restore it to its original state from the damages inflicted on the property by the private contractors.

The broken swings have been repaired, water access points are provided, and the park has generally been cleaned off the mounds of uncollected rubbish piling up for months.

A resident Sami Ullah expressed his great joy over the opening of the park after much-awaited government’s response. He said, “it is high time that the government should be made liable for providing healthy entertainment to people.”

In the second phase of the park overhaul, the municipality intends to install more swings, illuminate the park, plant more trees, and cultivate grass in the barren park.

In the face of expanding housing societies and shrinking public space, the provision of public parks is becoming more important especially for the underprivileged areas that generally do not offer many sources of amusement.

At the same time, the residents of Panjgur city hope that the city administration will provide more avenues of healthy entertainment.

Qadir Bakhsh Sanjrani is working with Pak Voices as a citizen journalist from Punjgur.