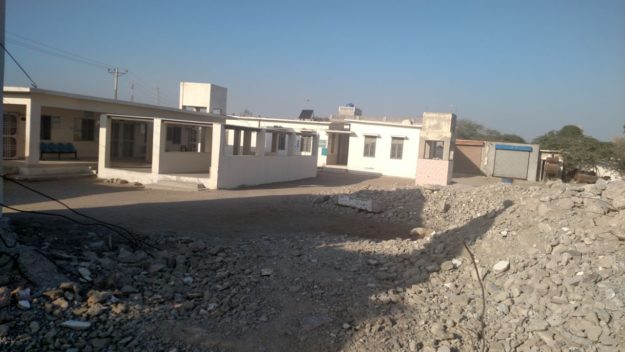 Mother and Child Centre of Regional Health Care Centre (RHC) in Pasni has been facing difficulties in treating its patients due to lack of basic facilities and basic medical equipment.

The only health facility for women continues to receive dozens of patients every day from the remote villages of Pasni.

The population of the city and its adjoining villages is increasing but RHC is not able to cope with the burden of patients with available resources. The centre has been facing the shortage of basic facilities and medical supplies for the last three years which has now reached alarming level.

Shams Khatoon, a patient sitting on the stairs of the centre, talking to Pak Voices said,” I’ve to come here despite the lack of facilities because it would cost a huge amount up to thirty thousand to go to other cities like Karachi or Turbat.”

A senior lady health visitor (LHV), who did not want to disclose her name, told PakVoices, “After the birth of a newborn, nod clip is used to detatch placenta to stop bleeding but due to non-availability of the nod clip we’ve to use thread that is unhygienic and could cause medical problems.”

There is no proper arrangement of transport of pregnant women due to which they have to use police mobile for pick & drop in case of emergency cases at night, complain locals.

On the condition of anonymity, another lady health visitor working at the centre, told Pak Voices, “Here, at the centre drinking water isn’t available and water crisis is such a big issue that we’ve to buy it to wash our hands after delivery cases,” adding that there are no blood pressure checker and delivery kits available.

She further said,” Due to non-availability of gloves, lady doctors and LHV’s are exposed to infectious diseases.”

Speaking with PakVoices, a staff told,” UNICEF had donated the latest ultrasound machine to RHC but due to negligence the machine is still unused because the staff to operate the machine could not be appointed.”

He further said, “Due to no use of the ultrasound machine, prior information about the baby’s position can’t be determined which can be dangerous in complicated cases.”

When Pak Voices contacted the Assistant Commissioner Pasni, Mr Zulfiqar Qarar, about the problems faced by RHC, he refused to comment on the issue saying that he was busy in three-day Polio campaign. But he said that he would visit the RHC immediately after getting free from the Polio campaign.

Badil Baloch is working with Pak Voices as a citizen journalist from Pasni, Gwadar.