Power crisis is a rampant problem Pakistan over but Makran coast had been relatively better off on this point until recently. However, the area has now started suffering from a severe electricity crisis which is adversely affecting individual lives as well as local businesses.

If we look at the electric supply on the provincial scale, the situation is abysmal. Balochistan gets a tiny share of Pakistan’s overall power production, which also adds to the sense of deprivation among the province’s inhabitants. Moreover, the power infrastructure in the province is very poorly maintained, augmenting line losses and further trimming down the supply.

Another key problem associated with electric supply in Balochistan is that the population is scattered all over the rough terrain which makes the installment of relevant infrastructure all the more difficult. The argument is often used to justify the lack of power supply in many areas of Balochistan but it begs the question: isn’t state required to provide all its citizens with basic facilities such as electricity?

An unusual aspect of the power supply in Balochistan is that out of the 6 divisions in the province, Makran division gets the power supply for most of its cities and many rural areas directly from Iran. At the same time, many areas in Makran rely on Oman-funded power generators to get electricity.

– Ormara tehsil has one city and nearly 30 villages. Only the city has access to power supply which is made available through an Oman-funded power generator. Even the city gets a mere 8 hours per day of electricity. All the 30 villages have no power supply.

– Gwadar tehsil has one big city, two towns and some 45 villages. According to government statistics, nearly 85% of the population in this tehsil gets electric supply from Iran while the rest of the 15% population has no access to this basic amenity.

A citizen of Gwadar expresses his views about the power crisis in the following words:

It is important to note here that while the problem of electric bill recovery is rampant in most of Balochistan, Makran has the biggest share of bill payers. Domestic consumers pay nearly 2000 rupees per month while business ventures such as shops pay 1500 per month. The bill is usually fixed for consumers because WAPDA officials generally do not bother taking meter readings.

People in the areas receiving electric supply through Oman-funded generators also have to pay the bills but it is allegedly because of misappropriation and corruption that officials plead non-availability of fuel to run these generators, thus leading to loadshedding.

On June 1, 2015 Gwadar residents launched a wide-scale protest by shuttering the shops and shutting down traffic in the city and surrounding areas. To ameliorate the protesters, the authorities simply transferred the entire staff of the local QESCO office and replaced it with different officials. While the gesture is meant to show that the authorities are ready to resolve the problem, no genuine steps have been taken to that end so far.

Translation: O sheep and lamb, live on for the spring is near

The decline in Calotropis plant 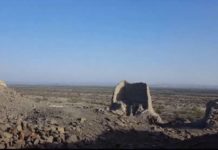 Meher Kalat: A place with history dates back to 7000 years