Like other children in a small town in Tharparkar district Mahipal Ladher also grazed cattle and carried water from far-flung sources for domestic use. But unlike other children, he dreamt an unconventional dream. He traced contrails across the clear blue sky spread above the desert town of Chachro each time an aircraft flew by. The young man ran across the desert following the contrails anticipating that they would lead him to the very plane that left behind the white streaks. Aircrafts were Mahipal’s first love, a source of continuous never-ending childhood fascination.

Mahipal is the first person from Tharparkar district of Sindh province to become a pilot. Mahipal grew up in a strategically significant town of Chachro situated near Pakistan-India border. The town was captured by Indian forces during the War of 1971 with Pakistan and remained under Indian occupation for almost a year.

Chachro is also a multicultural town where Hindus and Muslims share a rich cultural heritage and a common history. Mahipal belongs to Hindu religious minority community of Chachro. Tharparkar, in general, is an exemplary district for religious harmony. For Mahipal, his religious identity was never a barrier to realizing his dreams but his circumstances were.

Thar is one of the most impoverished districts of Sindh province where infant and children mortality rate is all-time high owing to malnutrition and inadequate health facilities. 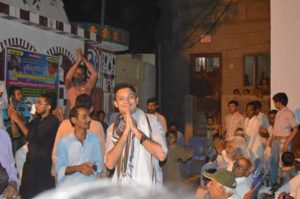 While talking to PakVoices, Mahipal recalled telling his grade-four teacher that one day he would become a pilot. The dream was stalled as he grew up searching for a reachable goal. It nonetheless remained perched on the sidewalks of his heart while he invested both time and effort in managing the day to day living. Practicality demanded a career that catered to his financial needs.

Until the grade four, Mahipal studied at a local government school and later at an Army Public School. It was the first-ever school established by the Army in Chachro after former President Musharraf took over in 1999. It was a few years later that Chachro got its first paved road connecting it with other nearby towns. Earlier it took them 12 hours to get to the nearest town, which was only 70 km away.

Mahipal was amongst the few fortunate ones who could go to study at the newly established school. There were five other students in his class. The standard of education was far better at the Army-run public schools but it was accessible to few lucky ones who could get admission on open merit.

For his higher school studies and beyond, Mahipal moved to Karachi, the provincial capital, to live with his brother. He went on to graduate with a bachelor’s degree in computers and a master’s in mathematics from NED University of Engineering & Technology and ended up becoming a pilot. It was his parents’ dream to send him to the prestigious NED University.

Mahipal’s father ran a small clinic in the poverty-stricken town of Thar and earned modestly but children’s education was his priority. He owes his success to his father who dreamt of a bright future for his children while living in the surroundings that did not offer much hope.

Mahipal believes that he became a pilot mere out of luck. On acquiring a professional degree and completing his education he kept dreaming to realize his childhood passion. The winds of fate favored him and in 2012, he enrolled himself in a three-year commercial pilot training program. Today, he is a licensed commercial pilot currently working with the Pakistan International Airlines.

“I never thought that I will actually be flying thousands of feet above the ground. It was way beyond my imagination. I cannot describe how I felt the first time when the wheels took off the runway. There is no feeling like that,” he explained.

Now that Mahipal flies high in the air, he wants to encourage young girls and boys of Chachro to dream big. When he wanted to become a pilot, there was no one in his hometown to support him. But the young people from his town are lucky who could be guided and mentored by him in realizing their dreams.

Aqsa Nizamani is working with Pak Voices as a citizen journalist.