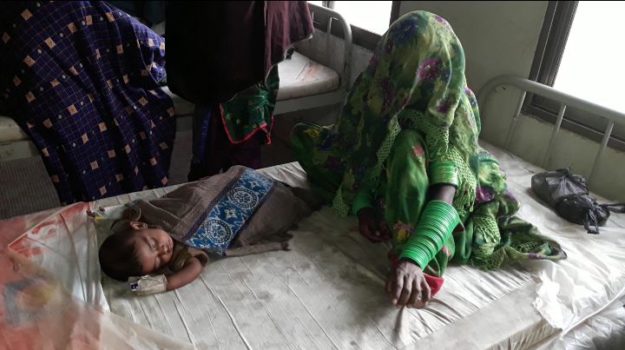 The only Rural Health Center of Islamkot in district Tharparkar tells a sordid tale as it is suffering from poor and inadequate health services.

Islamkot is the central town of the district that attracts a number of people from far-flung corners on daily basis for better economic opportunities.

locals complain that the only health center in the town which caters to the population of over 200,000 people does not even meet the minimum quality standards. The health centre is not only devoid of basic healthcare infrastructure, but there is not enough medical staff to attend to the patients.

Hamid Bajeer, a medical superintendent at the health center while talking to Pak Voices expressed his concerns about the inadequate health services available for the patients. He said that his major challenge is to attend to each visiting patient properly with the limited staff and inadequate facilities.

He further said, “even basic medicines were recently provided after the session judge of Mithi took notice of the situation.”

The Rural Health Centre does not even provide the x-ray facility and has the only ambulance at its disposal for a population of over 200,000 people. In case of an emergency, ambulance service is acquired from Mithi District Hospital which is 45kms away from Islamkot.

Under such circumstances, the town population is continuously at risk especially when the road accidents are rampant and the urgent medical attention is not available.

The district government Tharparkar never employed a child specialist or a gynaecologist doctor for Islamkot Rural Health Center. It is no surprise that child and maternal mortality rate continues to remain high in the district despite provincial government’s claims of providing adequate health care facilities.

Facilitating women population of the town with a gynaecologist has never been part of the plan for the Islamkot health center. Realizing the necessity of it, a local NGO provided a gynaecologist for a limited time period until the funds allowed. With the expiry of the funds and the project, the women of Islamkot are again on-their-own to endure and fight the various health challenges.

The health center does not even have funds enough to repair the only refrigerator and generator that have been out of order for past many months. It is surprising that the center has been operating without any backup arrangement, particularly for a generator when it is the only viable alternative to long power outages.

Similarly, the importance of a refrigerator for a medical center cannot be emphasized enough when it is needed to maintain medicines, vacancies, and blood banks under a certain temperature.

Many patients complained of being treated in an unhygienic environment. They said that they catch additional diseases while being admitted to the health center. They pleaded the provincial government to provide decent health facilities since they cannot afford a treatment at private hospitals.

The government of Pakistan People’s Party during its last tenure had announced to raise the town of Islamkot to the status of a district, and upgrade the health center to the level on par with other district hospitals. For over five years, residents of Islamkot have been waiting for the promises to be fulfilled, while losing their loved ones to poor health facilities.