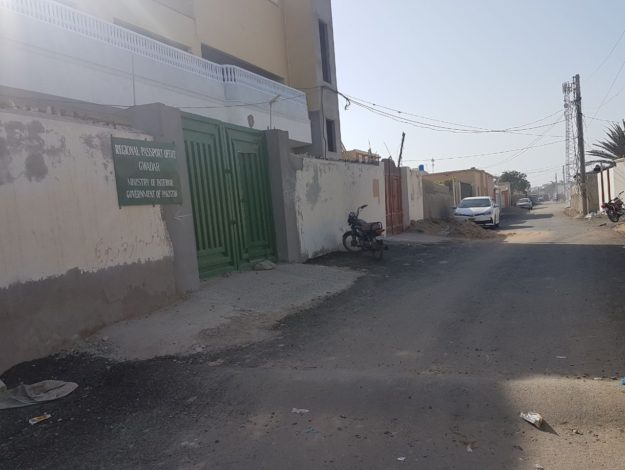 The passport office of Gwadar has been closed causing a lot of inconvenience to the local people. The officials cite the main server’s failure as the reason for the closure of the office. The local passport official, in charge, has also been transferred elsewhere.

Those who have to get new passports or need to renew the expiring documents have to travel either to Turbat or Karachi. It is not only a hassle but also requires a lot of money.

It has been over a month that the passport department went offline due to server failure. It was run by a single official who has been transferred elsewhere.

Waleed Hassan, a resident of TTC colony told Pak Voices, saying, “Gwadar passport office has been closed for over a month. On one hand, they claim that Gwadar is the centric city of CPEC on the other hand, they are depriving it of existing basic facilities.”

He further said that the higher authorities take the least notice of the problems in Gwadar. “The government claims are tall about Gwadar but they have failed to solve basic problems of the city and its people.”

Ali Baloch, another resident of Gwadar, while talking to Pak Voices about the matter said, “Since the closure of the passport office, either we have to go to Karachi or Turbat to get passports. It costs thousands of rupees for a family to travel and come back.”

He added, “It is very troubling to travel with infants and ladies. Those who wish to go on Hajj or Umrah and people going abroad for work and study are badly disturbed.”

Pak Voices talked to Shafeeq Khoso, the former in charge of Gwadar Passport office said, “The system machines and main server collapsed due to high electric voltage. Thus the office has been unable to facilitate people.”

He explained, “The issue has been reported to the main office in Islamabad and they have assured us the immediate solution of the problem. I have been posted somewhere else and soon Gwadar Passport Office will have a new in charge.”

The writer works with Pak Voices as a citizen journalist from Gwadar town.

Photo by the author