Editor’s Note: The writer is a leading investigative journalist who has also come under attack for his stories recently. His full name has not been revealed due to security concerns. The opinions expressed in this article are his own. 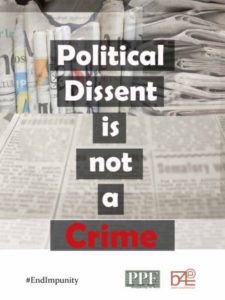 Freedom of speech and expression remains under attack in Pakistan. The brutal attack on Journalist Ahmed Noorani, known for his stinging and incisive commentary against powerful forces in the country including security institutions of the state, brings to light the challenges faced by those who try to speak out. That Pakistan is a democracy with courts and a parliament has been little to no help in alleviating the state of siege surrounding free speech and expression.

For a number of years now, dissent has been muzzled and common citizenry expressing critical views has been threatened. Even financially powerful mainstream media – both print and electronic – has been repeatedly forced to censor itself.

Threats to freedom of speech in Pakistan have been exacerbated by international and domestic political events and the complicated role of Pakistani state institutions with those events. Following 9/11, Pakistan’s involvement in international political games worsened the state of free speech. As a key ally of America’s war on terror, General Pervez Musharraf’s military regime reached secret compromises with the US government, which led to grave human rights violations.

Reporting on such violations remained a major challenge for journalists. Later, in periods of the democratic transition of 2007 and 2009, reporting on dissident elements, like the erstwhile lawyer’s movement, was often obstructed by those who controlled the security apparatus.

More recently, the confrontation between the civilian and military government has brought more curbs and constraints against free media and expression. The state of cold war between the democratically elected government and the military around the alleged rigging in the 2013 elections made objective reporting and analysis on the role of critical political players very difficult.

The dimension of social media has had a complex and largely negative impact on free expression. Those seeking to hold and voice dissenting views towards the state through social media feel more threatened than empowered. Initially, journalists used social media as a platform to spread information which would otherwise be censored in the mainstream media.

Political workers, activists, and ordinary citizens all quickly bandwagon-ed to promote their agendas. They began to highlight issues related to rights violations and other state excesses. But as it became more powerful, state actors which were being shamed began to fight back. Given how accessible social media platforms are, it has easily given state actors the power to monitor and clamp down on trends of dissent.

Threats due to social media have not only come from state institutions, but also from private actors and groups. Some have used the platform to spread hate. The most unfortunate and heart-breaking episode of such abuse of the platform is the murder of Mashal Khan, a young university student who became a victim of incitement of violence through the internet. He was ultimately killed on April 13 by a mob of angry students in Abdul Wali Khan University, Mardan, after rumors on internet surfaced that he had committed blasphemy.

Pakistani legal code has slowly but powerfully evolved to the emergence of social media, often in ways which contravene the rights of citizens. Initially, violations related to internet and the social media were handled through the Telegraph Act, first introduced by the British in 1885. In 2002, the Electronic Transaction Ordinance was introduced to deal with electronic medium related violations. In 2016, the incumbent government introduced the highly controversial Prevention of Electronic Crimes Act (PECA).

The law allowed state institutions to act against anyone who was perceived as having posted content with “dishonest intention” on any social media site. The subjective nature of the law gave unprecedented latitude to state institutions. It effectively gave them the license to stop the free flow of the information to the people and people’s right of free speech.

Surprisingly, despite the existing of such an overarching law, state institutions do not always resort to this draconian law to clamp down. They seem to act unilaterally. For example, in December 2016, five bloggers and social media activists, widely known for their critical positions on the security apparatus of the country, were picked up from the Punjab province. Fingers were pointed at intelligence agencies; however, they did not issue a formal denial.

This incident sent shockwaves of fear among those using social media as a mode of their expression. Civil society organizations held protests. They asked if the missing activists had committed any crime, why were they not being tried under laws like PECA? There was no answer.

A few weeks later, the bloggers were released from detention silently. Shortly before their release, a systematic campaign was waged in the social media alleging the bloggers had committed blasphemy prior to their disappearances.

Blasphemy is a very sensitive allegation in the Pakistani context, with an abundant precedent of riled up religious sentiments leading to vigilante killing of innocent people. The charge, thus, was a vile act which threatened the lives of the beleaguered activists. As a result, as soon as the bloggers came back to their homes, they had to quickly slip out to different foreign countries for safety.

Only recently they have started coming forward through interviews and alleged that state agencies not only kidnapped them but also tortured them in custody. Pakistan’s most powerful institution is silent on these allegations leveled by their own citizens, now living in self-exile.

The harassment of social media activists has not remained limited to private citizens. Soon after the disqualification and removal of ex-Prime Minister Nawaz Sharif, Pakistan’s Federal Investigation Agency (FIA), which is also the executing agency of the PECA, arrested activists of the ruling PML-N. In their case, unlike the private activists, the arrests took place under the controversial PECA. The detained PML-N activists were alleged to have criticized the Pakistan Army.

Interestingly, former Prime Minister Nawaz Sharif, in a statement from London, voiced concerns over the arrests of his party workers. Ironic as it is, the laws under which the arrests were made were introduced by his approval.

The combination of intolerance, subjective and easy to manipulate laws, and outsize power of state institutions has adversely affected the right to speech and expression in Pakistan. Attacks like the one on Ahmed Noorani add to the state of fear and anxiousness of those who believe in free speech and people’s right to know.

Ahmed Noorani’s wounds will heal soon, and hopefully, he will be back in the saddle to take on the forces of darkness, but the wounded state of Pakistani freedom of speech is not going to heal anytime soon. Unfortunately, the state of siege will continue.