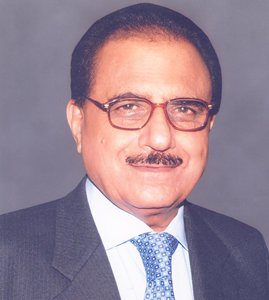 The KP government had recommended the names of bureaucrats Himayatullah Khan and Ejaz Ahmed Qureshi, while opposition had proposed the names of businessman Manzoor Khan Afridi and Justice (Retd) Dost Muhammad Khan for the coveted post.

The matter was referred to the electoral body after former chief minister Pervaiz Khattak and former opposition leader Maulana Lutfur Rehman failed to evolve a consensus on the caretaker CM. A parliamentary committee formed for the purpose also failed to evolve consensus over the matter. The committee also became controversial after criticism of the opposition parties over its composition.

Justice Dost Muhammad Khan was retired as the judge of the Supreme Court of Pakistan on March 20, 2018. He remained the Chief Justice of Peshawar High Court (PHC) from 17 November 2011 to 31 January 2014. He was elevated to the Supreme Court on 1st February 2014.

Justice Dost Muhammad was born in Bannu in 1953. He obtained his law degree from Karachi. He was first elected as president of Bannu High Court Bar president and then the PHC Bar president. He was among the judges who had refused to take oath under the Provisional Constitutional Order (PCO) on 3 November 2007 during the rule of President General (Retd) Pervez Musharraf.

Under Article 224-A of the Constitution, the chief minister and opposition leader are empowered to name caretaker chief minister within three days of the dissolution of the provincial assembly and if they do not agree on a name, the matter referred to the parliamentary committee. If the committee fails to reach a consensus, the matter is forwarded to the Election Commission for a final decision.

Earlier, the PTI and JUI-F had agreed on the name of Manzoor Afridi for the caretaker chief minister. However, the PTI chief latter objected over Mr. Afridi’s name over reports that he had sponsored the JUI-F campaign against the Fata-KP merger.