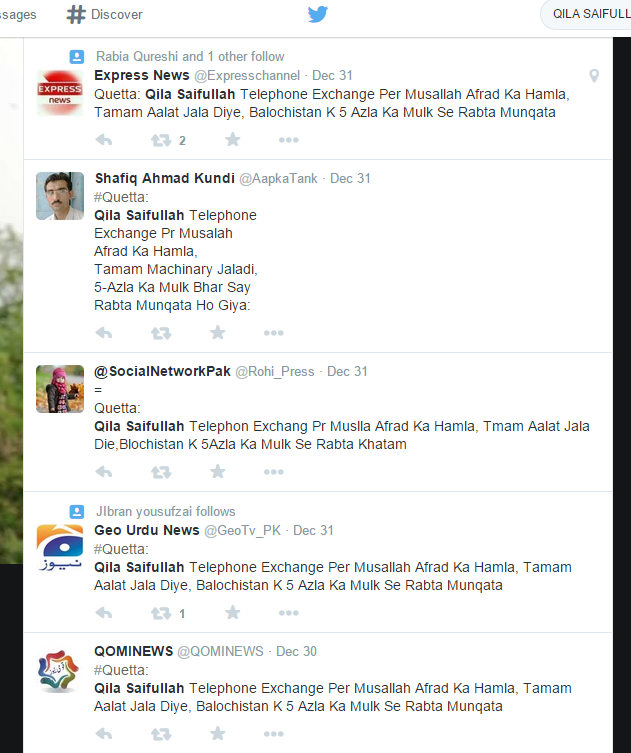 The residents of five districts of relatively lawless province Balochistan were disconnected from rest of the country on 30th December (Tuesday) , as an affluent resident of Qila Saifullah and brother of the sitting provincial minister, Nawab Riaz Jogezai, allegedly stormed the telephone exchange and damaged the equipment.

Digital rights’ activists expressed their concerns for disconnecting the masses from accessing telecommunication services resulting in violation of their right to freely access information, besides connecting their families.

The government has enacted a strict policy on grey traffickers for some time now because such services are operated without paying any taxes, incurring more than $1 billion in losses to the national treasury.

PTA had asked PTCL to offline his number. However, PTCL’s local office avoided doing so, fearing political influence of the Nawabs, the source informed this scribe, adding that PTA requested Nawab’s family to switch off system installed to illegally convert international signals into domestic. But the Nawab family turned down the request.

The news of attack quickly made it to the social media conversations but most mainstream newspapers and TV channels chose to ignore the incident.

Since all mobile operators’ transmissions are dependent on PTCL optic fiber infrastructure, mobile communication, internet services, landline communication and wireless local loop services remained suspended for around a million people residing in Qila Saifullah, Barkhan, Kohlu, Zhobe and Musakhel districts of the province as a result of the attack on PTCL office.

The source says that the services were restored after negotiations with the Nawab Riaz Jogezai and putting his landline number online around 1 at midnight. “Neither the provincial government, nor PTCL authorities took notice of the incident” the source said, “No FIR has so far been lodged against the culprits.”

When Pakistan Telecommunication Authority’s Enforcement Wing at the headquarters was approached for details regarding the incident, the female officer at the office refused to share any relevant information.

“The regulating agency is not supposed to give information to journalists or activists”, PTA officer replied on telephone, also stating that PTA matters ought not be discussed publicly.

Khurram Mehran, the Director Public Relations PTA, was also not accessible after repeated attempts on his personal phone, neither did he respond to the text message.

Update: On Friday evening, six PTCL officials were abducted in Killa Saifullah district, Dawn reported. A security official blamed the militants, who have also been involved in other recent kidnappings in the district. The last incident involved the abduction of 10 people last month, seven of which were later released.