Home Feature Ashiq Buzdar: The Poet Who Rebelled Against The Lahore Throne 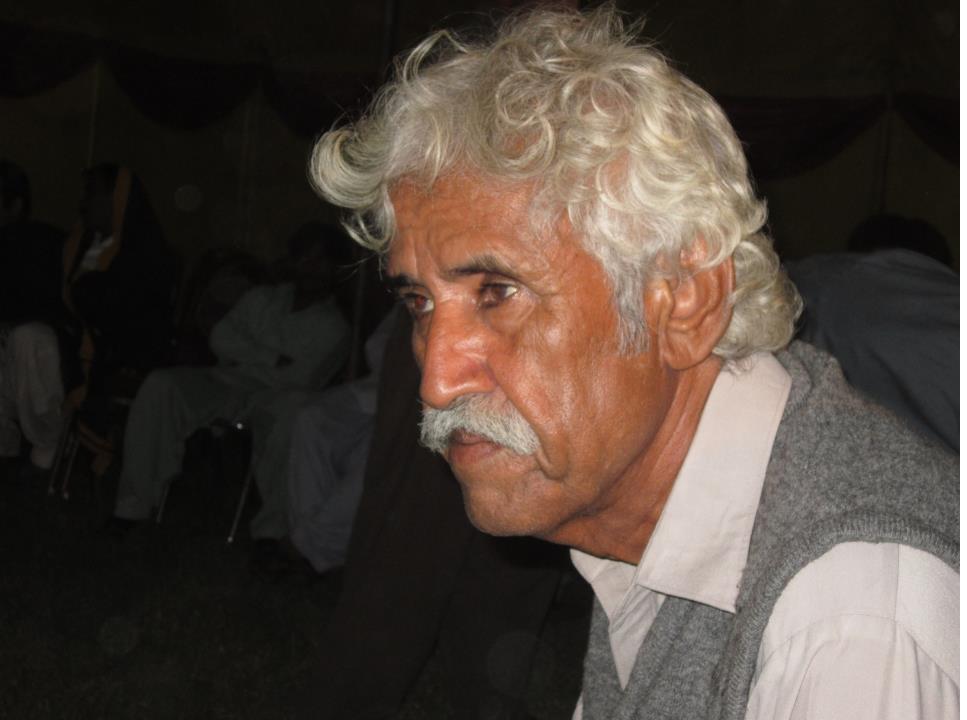 At a few kilometers from Fazilpur in southern Punjab is the village of Chah Mahre Wala. Here lives the renowned Seraiki poet and activist, Ashiq Buzdar . With his disheveled white hair, chevron mustache and humble demeanor, it might not appear so, but Buzdar, now in his 60s has been at the forefront of a decades-long struggle for the recognition of Seraiki cultural and political rights in Pakistan.

He is a poet and has written many books on culture and poetry. He is also one of the founders of the Khwaja Fareed Seraiki Literary Cultural Festival, an annual event that has been held in his village for the past 30 years. Though he is arguably most famous for his rebellious poem and book “Asaan qaidi takht Lahore day” (We are prisoners of the throne of Lahore). The book was banned during the Zia martial law era for so blatantly declaring a Seraiki identity separate from the Punjabi ethnicity that has dominated the Pakistani state.

I start the interview by asking Buzdar what his ideological leanings are. In response, he cites a verse by Maulana Hasrat Mohani, the Urdu poet and co-founder of the Communist Party of India: [urdu]

[/urdu] (Translation: Asceticism and revolution are my religion; I am a Sufi believer, and a socialist Muslim)

“That sums up my ideology as well,” Buzdar says.

Then he reveals the beginning of his interest in politics. When the Pakistan People’s Party (PPP) came into being in 1966, Ashiq Buzdar was still a college student.

“Rajanpur, my home district, had a sardari (feudal) system in place, much like in portions of neighbouring Balochistan and Sindh. I witnessed first-hand the difficult and miserable life of a common man under the sardari system and always wanted to work towards changing it. When the PPP came and offered the slogan that ‘taqat ka sarchashma awam hai’ (The fountainhead of power is the People), I joined the party.”

Buzdar says that between 1966 and 1970, the sheer quantity of political and literary texts churned out by  intellectuals in Pakistan, notably linked to the PPP, is unmatched in the history of the country. “The PPP continues to exist thanks to those 3 years.”

Since those early days, Buzdar’s views are now more closely aligned with the Seraiki nationalist movement. The movement, he says, was launched nearly 30 years ago and over the last three decades, has significantly reshaped the intellectual outlook of the Seraiki region. The basis of the movement is the recognition of the idea that people in the Seraiki region of southern Punjab are a distinct nation. Buzdar defines a nation as “a collection of individuals living in a given region together for thousands of years, and sharing a language, culture and ideals. Every nation is specific to a given region.”

Since the launch of the movement, it has come a long way. People in the area today openly embrace the Seraiki identity and the idea that their history and culture is distinct from Punjabi culture, which was not the case just a few decades ago. . The authorities have also reluctantly accepted this change in popular sentiment at some levels. For instance,  Buzdar tells this with joy in his voice, the registration form of the National Database and Registration Authority (NADRA) today lists Seraiki as one of the officially recognized local languages in Pakistan.

Drawn up by activists in the 1970s, the proposed province comprised of Multan, Bahawalpur, Rahim Yar Khan, Rajan Pur, Dera Ghazi Khan, Lodhran, and Muzaffargarh, districts which currently fall within the province of Punjab, and are administered from the provincial headquarters of Lahore.

During its last term, Pakistan People’s Party brought the issue of a Seraiki province to the national stage. But despite countless promises, efforts towards the creation of one weren’t sufficiently made, leaving the matter in limbo for now. However, in the meanwhile, a number of Seraiki nationalist parties have emerged, championing the cause and striving for a political unit of the Seraiki regions.

Buzdar has carried out most of his political struggle using the vehicle of culture and poetry, and a number of his books and a major part of his poetry is about the Seraiki national movement. Among these is the book ‘Qaidi Takht Lahore Day’ (Prisoners of the Lahore Throne) which was published in 1985 during General Zia-ul-Haq’s rule. It carried his famous hard-hitting poem of the same name in which he highlighted the sense of exploitation and oppression felt by Seraiki people against the Punjabi ruling class, similar to sentiments expressed by progressive nationalists of other ethnic groups in the country. [urdu]

[/urdu] (Translation: Oppression has muffled our voices, our hands are shackled

The book did not go down well with the martial law administration at the time and was immediately banned.  When Buzdar later contested for a position in local government, Buzdar’s political opponents filed a case against him in court, claiming that his book fanned linguistic sectarianism making him ineligible to run. The session judge ruled in his favor that the book was wrongfully banned in the Martial Law era and did not contain any provocative material.

Buzdar also compiled other books of poetry including ‘4 April’ which is a compilation of Seraiki poems about the hanging of Zulfiqar Ali Bhutto, and ‘Jhe Phul Chatay’, a collection of poems about Benazir Bhutto. He emphasizes on the significance of poetry in Seraiki literature and at the same time alleges that certain notable poets from the Seraiki region have been appropriated by Punjabi chauvinists. He cites the example of the Sufi poet Khwaja Farid who wrote in both Seraiki and Punjabi, whose Kafi’s now form the canon of Seraiki poetry.

Reclaiming Khwaja Farid, Buzdar has been organizing a Seraiki literary and cultural festival in his name for the past 30 years now. The annual event celebrates Seraiki poetry, literature, music and theater which takes place at Buzdar’s house in Chah Mehrey Wala in December each year.

He believes that literary and cultural activities are key to a vibrant national consciousness. He is optimistic about the future of the Seraiki movement and says that given its rather recent inception, it has achieved many successes and is gaining more momentum as time passes.

He sums up his life’s struggles, works and ideals in the words of Hafiz Jalandhari, [urdu]

[/urdu] (Translation: Whatever Hafeez has achieved in literature and learning