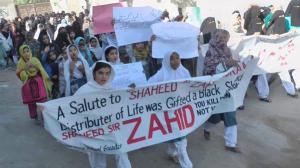 Students and civil society activists have been holding a series of protests in Gwadar, against the killing of local educationist Zahid Askani.

On 4th December, Askani was gunned down by unidentified assassins in Gwadar. According to Dawn, His car was attacked and he was shot seven times after which his body was moved to District Headquarters Hospital.

Askani founded the Oasis School System in Gwadar, which is one of the largest private co-ed schools in Gwadar. He was also the General Secretary of the Gwadar Private Schools Association and the president of Pakistan-US Exchange Programme Alumni Network Gwadar Chapter.

The motive behind the murder is still unclear, but local social activists told PakVoices that they believed he was targeted by a militant religious organization because all his schools promoted co-ed schooling system, where girls and boys study together.

The Express Tribune quoted an official at the Panjgur police station: “The principal [Askani] was on his way to the school when unidentified persons riding a motorcycle intercepted him and opened fire from a very close range.” He added: “The attackers managed to flee from the scene unchallenged after committing the crime.”

In the last few months, private schools in the Makran Division have received a number of threats from armed militant groups which led to their temporary closure in Panjgur in May. On 13th May, Tanzeem-ul-Islam-ul-Furqan stopped a van full of students and set the van on fire. “They forced the female students to get off the van and set it on fire,” Major Hussain, a principal of a private school, told The Express Tribune. “They said: ‘You are spreading obscenity by promoting the culture of co-education’.”

In a press release issued on 5th December, the Baloch Students Organization Azad (BSO-Azad) claimed that this series of attacks on teachers was part of a planned attack to deprive Baloch students of education. They pointed out that in the past, other teachers had also been killed but their murderers have yet to be brought to justice. The student group praised Askani for his efforts in Gwadar, “In an education deprived areas like Gwadar, Zahid Askani worked day and night to create an environment conducive to learning.”

In a separate incident, on 2nd December, Adviser to the Balochistan Chief Minister on Education, Sardar Raza Muhammad’s vehicle was targeted by a bomb, but he survived the attack without any injuries.