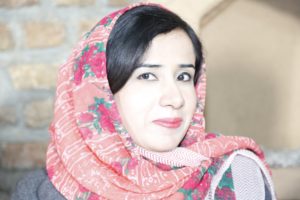 Belonging to Budhapur in district Jamshoro, a Sindhi girl from ‘Shoro’ community has not only got a higher university education but also emerged as a vibrant social worker. She has contributed restlessly for the betterment of the society. Being born in a male-dominated society, she has chosen a ground breaking path.

It is a milestone not only for her but also for the whole community as previously, a majority of people from Shoro community do not consider sending their children especially girls for higher education.

Sanober used to watch pigeons in the sky from an early age which became her utmost inspiration as those pigeons signified freedom. She dreamt to see everyone celebrating their religious festivals with their neighbors without discriminating them on their faith and beliefs. Her thoughts and growing ideas are more inspiring for people of her own age.

She was born on September 30th 1991. According to her father Akram Shoro, Sanober used to speak on peace and harmony every year on the celebration of Independence Day. He further said that a Hindu girl, Meena Kumari was her best friend due to which she faced a lot of opposition even from the majority of the family members. However, she remained motivated by her friendship and her ideals. 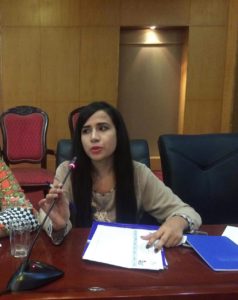 Q. What were the major problems and hurdles that you encountered during your academic life being from the under-developing area?

I think, firstly we need to set our mission where we need to encourage people to achieve something in the context of social development for the society and we must also have the strength break the stereotypes existing around us.

When I completed my primary, high school and college education, I opted for University, however, I faced a lot of criticism and opposition from my own family members and it was only my father who supported me and faced all the criticism himself. Budhapur itself gave a peaceful and loving environment overall where I observed many things however it was not supportive of my education choice.

I think we need to work together without gender discrimination to enable a greater understanding. I started my journey in the field of journalism and got admission in masters for media and communication studies University of Sindh, Jamshoro and till now have achieved many milestones.

Q. Can you give our readers a brief introduction of your exposure in Afghanistan being a representative of Pakistan? 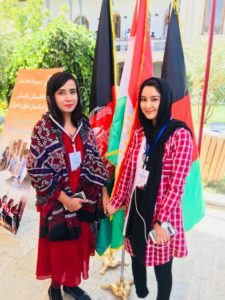 I think it was March 2017 when Media House Islamabad approached many faces like me from different regions of Pakistan to portray a positive landscape in the neighboring country. The major purpose of their call was to create a bridge between two countries and recognizing the [power of youth which can make this possible.

With the passage of time after completing their whole requirements as per the demand of host organization Mediothek Afghanistan, I was selected and felt proud that I will be the only who would promote and highlight peace internationally. However, when I approached my family members and shared the whole details of this program they totally refused and their cited reason was the lack of sound relations with the people of Afghanistan.

I started and continued my hunger strike for more than three days so as to get approval and finally got the permission of my family to visit Afghanistan. Kabul was my destination and it was a challenge for me to express my judgments and observations there as being a Pakistani there was a lot of stigma attached. My presentation was on the topic of “Media Vs Reality”.

Q. In your opinion, what remains the most pressing issues in reality and how mainstream media is portraying it?

We have seen a large difference between the reality and the hate creating biased stuff of media; When I spoke in front of the people at Pak-Afghan event, I talked about people like us who consider media as the fourth pillar of state and a strong medium to recognize the approach of decision and policy makers and many other factors. One needs to see as to why media creates negativity rather than inculcating a message of peace and positivity.

Q. Who will get more benefits, if Pakistan and Afghanistan create the friendly environment?

Both countries will get benefits from each other which can only be achieved through mutual understanding. The major population of both countries is youth based. Their culture, way of living, style and language is similar to people residing in northern areas of Pakistan. The natural resources and livestock will serve as an export and import bridge and will, in turn, make the society peaceful.

Q. As I am sure you are aware, people used to say Afghanistan as the terrorist state, so how it is possible to change such sense any agenda?

This is obviously a very serious issue. But I think it is not easy to make all people agree on a single statement, although one can try to change the mind of people by individual capacity. I personally observed here in Pakistan we have always accepted the views and practices of other rather than researching and communicating with relevant people on their own. Such thought will surely vanish when people start to accept more viewpoints and see peace as the utmost answer.

Q. What efforts can growing youth undertake to make such mission possible?

The issues you and I have been talking about this morning are not just about two countries and their people only but have an impact all over the world. A positive framework will work best for both the countries and will also attract appreciation from the other countries as well.