Home Free Speech When they finally came for me

Editor’s Note: The author has worked for international media for the last 12 years and considers himself a Freedom of Speech activist. His work has appeared in the New York Times, the Guardian and France24, to name a few. He won the Albert Londres Prix a.k.a. French Pulitzer Prize in 2014 for a documentary on polio in Pakistan and Afghanistan. The opinions expressed in this article are his own.

Many times that I have socialized with my journalist friends in Islamabad, they have asked for a selfie with me at some point in the evening. This is a running joke and has happened to me multiple times with multiple friend journalists. And it is not because I am a celebrity… It is because they think I will one day be picked up by authorities and may never come back and at least they will be able to boast about the last photograph with me.

There is a humor in that and we certainly have a good laugh now and then over it and I guess that’s how perhaps we are left to cope with it, but there is also much truth in it, which should scare me but does not as yet. However, it is taking a toll on me given that in the calls for me to exercise self-censorship, it is no longer the authorities “calling me” out but also my friends, colleagues and family. But more on the personal struggle afterward. First, the calls by officials – and they literally are “phone calls”.

One such call I received was on an evening in May this year, as I was playing with my four-year-old son. The person introduced himself and his designation and said he was calling me from the counter-terrorism department wing of Federal Investigation Agency (FIA), a government agency tasked with investigative jurisdiction on undertaking operations against terrorism, espionage, federal crimes, smuggling and other specific crimes.

I wondered why the FIA’s counter-terrorism department was calling me, given that I was a journalist, but I thought it was perhaps to get more information about a story that I had reported on, a usual practice in Pakistan.

But soon I realized I was wrong. He asked me to leave everything I was doing, and immediately appear in person at his office as he had urgent matters to discuss with me regarding my journalistic work. When I asked him to specify what work it was that they wanted to discuss, he refused to divulge and insisted that I come to his office.

I had heard of reports during that week of people going to the FIA and being unlawfully detained, and their communication equipment like laptops, phones etc. taken away. Some were intimidated to stop speaking openly on social media and asked to deactivate their accounts. Keeping all that in mind, I refused to abide by his “order”. The officer’s tone changed and he started to threaten me of facing dire consequences and when I did not still budge, he hung up on me, saying he will deal with me soon.

I made some calls to friends after the officer’s call. That’s when a friend sent me a list of individuals, some active on mainstream media, others on social media, who were being investigated by the FIA. No one knew where the list had come from but it appeared to be an internal memo by the government body and it said it talked about action to be taken against those maligning the Pakistan army, with a list given below that included my name.

I immediately understood where the pressure was coming from on this civilian institution to silence me. This was the time when the relations between Pakistan Army and the civilian leadership in the country were quite tense, and there were talks of appeasing the military brass.

Since I knew I had done nothing wrong, I decided to stick to my decision of not appearing before the FIA, especially when I knew that my only “crime” was exercising my right to freedom of speech. I failed to see how I had anything to do with terrorism. I consulted with a few more friends and reached out to Asma Jahangir, a renowned human rights lawyer, through a contact. She and I discussed the option of going to court. And we decided to file a petition at the Islamabad High Court asking the FIA to explain themselves for harassing a journalist.

In the first hearing, the judge directed the FIA to stop harassing me and explain their position. Despite that, the FIA went on to serve me a notice, insisting that I appear before them or face arrest. They recently have also filed a response at one of the hearings saying my petition should be dismissed and I should be investigated. I’m awaiting more hearings in the case.

Until now, the FIA has not formally informed me or the courts over what I said that triggered the crackdown but I also know it is not about just one of my stories, social media posts or analysis. It is about me talking openly about topics that are no-go areas for people of my profession.

But I believe I can hardly do any serious journalism without talking about the military establishment, which has an extensive footprint in the country beyond its mandate and has been held responsible for many of the political and societal problems Pakistan faces today.

However, it is becoming increasingly difficult for me to continue in this manner. As I mentioned earlier, it is not authorities that I am bothered by, because FIA was not the first to call me and they have not been the last. I have received multiple calls from all kinds of Pakistani security agencies, and continue to face this.

What bothers me more is how now my near and dear ones are asking me to go silent. I understand that they care about me, but what they need to understand is that what I am doing is also out of my concern for them – I know I am taking more risk than them but it is only to protect them. As the saying goes: “…when they finally came for me, there was no one left to speak for me!” and I hope it does not reach that stage but if we continue to advise each other to censor, a collective silence will only take us to a place where there will be no one left to speak for any of us… 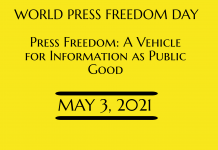 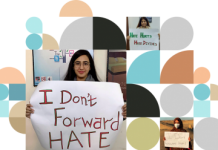 I Don’t Forward Hate: An online campaign to promote diversity and pluralism in Pakistan