Home Opinion ‘Radd-ul-Fasaad’ Yet to Focus on seminaries

After a series of attacks last month, the government has launched a new operation ‘Radd-ul-Fasaad’ to cleanse the country from militants with a special focus on Punjab province.

The authorities have deployed paramilitary rangers in southern and northern border districts of the Punjab province.

According to some reports, it has been claimed that Punjab Rangers have conducted more than 200 search operations across the province including Karor, Layyah and Dera Ghazi Khan in the south Punjab, killing at least four suspects and detaining 600 suspected militants. Many suspected places were searched during the operation.

According to reports, so far no major network has been broken in the region.

Most of Pakistan’s seminaries recruit their students either from the northern tribal districts or southern districts of Punjab. The famous ‘Red Mosque’ in Islamabad too has many of its followers from Southern Punjab, particularly from Rajanpur and Dera Ghazi Khan districts where Molana Abdul Aziz and his family has roots.

But the newly launched operation, which has the main objective to eliminate terrorists’ facilitators and sympathisers from the region has not touched any seminary so far.

“This operation should focus on the seminaries of sectarian organisations and sleepers cells,” says Amir Rana, a leading security analyst and writer.

But Hanif Jalandhari, Secretary General of the Tanzeem ul Ittihad Wifaq ul Madaris confirms that so far no seminary was investigated by the authorities during the current operation.

“As far as I know, no seminary has been checked during the operation Radd ul Fasadd,” he said adding that he was in favour of registration of all seminaries.

Rana says that South Punjab is the hub of several banned organisations and they have set up their headquarters in the region.

“These organisations continue to change their titles and reestablish themselves. They should be targeted. No organisation which has been banned under the country’s laws particularly the National Action Plan (NAP), should be spared,” he said.

Rana said that the security forces have so far appeared only doing fire-fighting in the operation Radd ul Fasaad.

“This action requires extraordinary coordination and intelligence sharing among various security agencies. Until and unless that coordination is ensured, this operation may not be quite useful.”

“This region is unlike tribal areas and Karachi. It’s much sensitive and requires special expertise to deal with the situation,” he elaborated.

Rana said that the region has up to 19,000 known seminaries those need to be combed carefully to determine that which are genuine peaceful institutions and which are being used as terrorists’ hideouts.

Jalandhari, however, says that 90 percent of the total seminaries were registered and the rest of 10 percent had applied for the registration.

“Their registration is being delayed by the government because of bureaucratic hurdles,” he said but quickly added that there may be some places those might be considered as some small unregistered seminaries but actually being used for some other agendas.

“We have nothing to do with those. The government should register all genuine seminaries and take action against those who refuse registration.”

A senior government official, however, viewed that many seminaries were reluctant to provide data about their students and teachers and the relevant authorities were monitoring the situation.

“We can’t say outrightly that all unregistered seminaries are being used for illegal activities but yes many are unwilling to provide details. The concerned quarters are working to trace the original hideouts of terrorists,” he said.

Rana said that this operation should go for clean up of militants’ hideouts in South Punjab and other areas and the police should be assigned to keep a constant watch on all suspected places in the region.

“The nurseries exist. They can only be eliminated if police continue keeping a close eye on the suspected places through coordinated intelligence from other security agencies,”.

Author Bio: Khurram Hussain is Islamabad based journalist with interest in political and human angle stories. 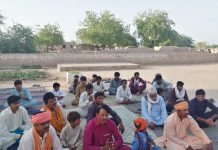 In pictures: Hindu community holds prayer ceremony in the wake of Coronavirus