Pakistan and China signed a memorandum of Understanding (MOU) in Beijing this May for the creation of Gawadar Smart City. Ahsan Iqbal, Pakistan’s Minister for planning, addressing the ceremony had said, “Gawadar Smart City is being created on the standards of Singapore and Hong Kong,” adding, “The city will emerge as an international port city very soon.”

According to local officials, the master plan of the city is being upgraded to achieve the goals of Gawadar Smart City Project. A Chinese delegation has recently visited Gawadar for reviewing the project.

The purpose of Gawadar master plan up gradation is to expand the port and acquire more land for China Pakistan Economic Corridor ( CPEC ). Mulla Band is one of the oldest residential colonies in Gawadar with 559 families according to records of Election Commission of Pakistan. Majority of the locals are fishermen.

Jamaat Jahangir, President Fishermen Forum, who is a resident of Mulla Band as well, told PakVoices, “Many generations of fishermen have lived here and still 95 percent of the local population earn their living by this profession.”

Jahangir said,” Thousands of fishermen will lose their job in case they are shifted.” He further said that they are not against being shifted but any such plan at the cost of their livelihood is unacceptable.

K.B.Faraaq, a well known and respected social worker and a resident of Mulla Band seems to be on the same page with Jahangir regarding the smart city plan and said, “Shifting from the old city has not been smooth in the past,” pointing out, “fishermen were shifted away from sea in the past as well but that had negative impacts on their lives and livelihoods.”

According to Faraaq, “Moving the fishermen away from the sea is just like you pick the fish out of the water.” 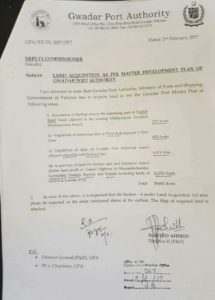 People from one part of Mulla Band were already shifted from the old city for the expansion of the port area. For acquiring more land in the area, Gawadar Port Authority has already sent a letter to the provincial government.”

It’s worth noting that the sale and purchase of land at the port area or old city has already been suspended by District Administration and Gawadar Port Authority.

Dosteen Khan Jamaldini, the Chairman Gawadar Port Authority, talking to PakVoices said, “We have sent a letter to the provincial government to acquire more land in Mulla Band area, however, our priority will be to acquire land from an inhabited area.”

He further added, “Locals will be paid the price of land by the provincial government if they are shifted,” adding, “our priority is that locals at Mulla Band are not disturbed.”

Contrary to the claims of government officials, the locals at Mulla Band are worried and mentally disturbed because the government has kept them in the dark about the shifting plan of the old city.

Chairman Gawadar Port Authority told PakVoices, “Government wants to benefit all the residents of old city including those of Mulla Band.” He said, “Interest of local community will be the top most priority in case Mulla Band or other areas of the old city are to be shifted.”

Talking about the uncertain situation faced by the old city, Faraaq said, “According to our information the government has decided to shift people from remaining area of Mulla Band but neither the residents of the area are taken into confidence nor any clear policy has been announced.”

In the wake of such uncertain situation, worries and tensions have been mounting in the old part of Gwadar. Officials have also conducted three surveys of the area and biodata of each and every resident has been collected.

Faraaq further told PakVoices, “We are not in favor of shifting, however, if the government wants it then the land should be taken on the lease,” adding, “local people should be provided jobs as well as they should be included in the profit of the project.”

Barkat Ullah Baloch is working with PakVoices as a citizen journalist from Makran Coast.