The Hindu community of Tharparkar in Sindh province not only facilitated the mourning processions on Youm-i-Ashur but also took an active part in mourning as they pay tribute to the sacrifices of Imam Hussain in Karbala.

Likewise, the Hindus of the Cholistan Desert in Rahim Yar Khan, Punjab distributed Niaz and set up Sabeel stalls in the rout of the procession.

So, many Hindus in Pakistan join the procession and make arrangements for Sabeel for the mourners. Some Hindus also worship the Tazia and kiss the cloth on it as a sign of respect. 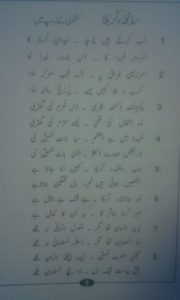 glowing tribute to the great Imam Hussain. Das told PakVoices that he used to sit in the company of Sufi saints in good old days when he developed his taste for Shia version of Islam.

Das mainly writes on Hindu religion and is well respected among the Hindu community. He said that both Hindu and Muslim communities enjoyed a strong bond and participated in each other’s religious festivals before partition, which needs to be revived.

Here are the glimpses of the procession which attracted communities across different faiths:

All photos by the writers