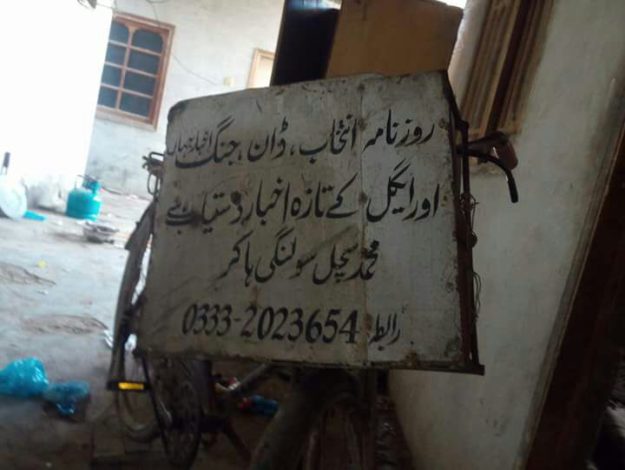 The distribution of newspapers in Balochistan has remained out of circulation for the last four days starting from Tuesday after the banned outfits threatened and attacked media community. It’s not only journalists this time who are under threat but hawkers have also come under attack by the banned militant organizations.
A climate of fear prevails among the hawkers’ community after the grenade attack on Hub Press Club and Turbat news agency office.
Pak Voices interviewed a hawker Mohammad Sachal who has been working in Gwadar for over ten years. He Said, “I have been supplying newspapers in offices, shops and homes on a bicycle. This is the first time in 10 years that the newspapers are have gone out of circulation in the city.”
He continued, “The readers call me and ask me to provide them a copy of newspaper by hook or by crook but there is no supply of newspapers at all in the city.”
The banned outfits had expressed reservations about the media coverage of their activities and issued an ultimatum to stop the distribution of newspapers by 24 October 2017. The supply of newspapers has been prevented since Tuesday whereas the hawkers association has also refused to distribute newspapers after the surge in attacks against the media.
However, a few news agencies and hawkers disregarded the threat issued by the militants. One of the agencies in Turbat continued the circulation of the newspapers which attracted the wrath of non-state actors. The militants attacked the agency’s office to teach a lesson to the hawker who had not acted on their ban.
The shops of newspapers distributers, offices of print and electronic media and Gwadar Press Club remained shut down. However, some policemen have been deputed to provide security to Gwadar Press Club.
While Sachal feels threats after recent attacks but he is also worried about his meager daily wages which he would earn by selling newspapers.
He ends the conversation with a serious note, “We earn our living only by selling newspapers. If there are no newspapers, we will go jobless.”
Edited by Hassan Khan