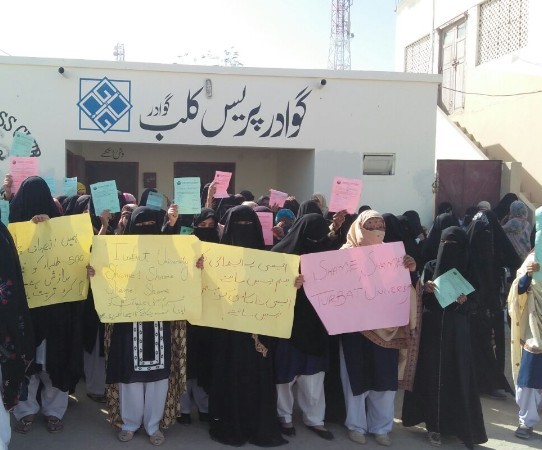 In Gwadar, like most of Balochistan, quality education is yet a dream. An emerging economic hub with an annual population growth rate of three percent, nearly every student under public institution is deprived of a quality education that makes up a concrete base for higher studies.

On 2nd February 2018, for the first time ever, a large number of girls from Girls Degree College railed to the Gwadar Press Club protesting “We Want Justice,” with their mark sheets in their hands, almost all of them had the same stamp, “FAILED,” not even specified what they failed in.

Same was the situation in the boys’ college but this time, girls seemed to be unhappier with their results and therefore were seen more aggressive as compared to the boys.

The students claim that their papers were not properly checked and therefore they questioned the concerned authorities, for failing a larger number of students, when only 33 students would pass out of 888 – 30 girls and only 3 boys according to the media reports.

When the result was announced on 31st January, and the students received their mark sheets with a large red stamp, they could not stop protesting and therefore marched towards the Gwadar Press Club.

The first day was a regular protest, but since today’s protesters widely employ smartphones and use of social media, they did not end their protest in front of the press club but fully benefitted with their virtual presence in the following days.

College exams of Gwadar were previously handled by Balochistan Board but this year for first time, they were handled by the University of Turbat. After the protest, the authorities in the University announced that the exam and the checking procedure were completely transparent.

However, the students in Gwadar were not ready to hear any explanation and therefore continued their protest, especially they did not hesitate to blame all of their neighboring district of Kech and the people living there via what’s app voice messages that went viral. Blaming the people for the failures who do not even have any contribution in the procedure is baseless as anyone can assume.

But it even did not end there, and people from different districts of Balochistan and from Karachi began another process of answering all the blames. These virtual arguments in form of recorded voice messages on what’s app worsened the situation than solving it.

Raising voice for justice and reaching to the public and media, online and virtually is the way mostly employed today. But the way things should be handled is yet something to be learned in a society that has recently been introduced to the virtual world.

There is nothing bad in reaching out to the public as using the right to free speech bestowed by the country’s constitution, but raising fingers toward all of the people living in a certain region, can only worsen the situation than solving it and therefore should always be avoided.

However, even after all social media appraisal that fueled the controversy around the issue, it is still hard to understand how 97% of the students would fail. After all, it’s a huge number to ignore.

Few protesters argued that some of the students who have not even been present during the entire academic year in college and have been studying elsewhere were declared passed and the rest failed.

If this is the case, the education department will have to take notice because when students who had studied elsewhere for instance in Lahore and Quetta and merely appeared in the exam, could pass and the rest failed, the college authorities are questionable here.

First, how they could allow students to take an exam when the same students have been studying elsewhere. Secondly, there are possibilities of some flaw in the way students are taught in Gwadar college contributing to the students’ failure. However, there are also possibilities of perhaps the papers were in actual not checked properly.

On the other hand, many suspect, the quality of education provided from the basic responsibility for the result produced. The public schools do not offer proper education and the worse happens during board exams when students are all allowed for cheating.

This norm in most parts of Balochistan has deteriorated the education system already. Though, 2015, Balochistan government initiated the “No Cheating in Exam” campaign. And in 2017, it was applied during the recent college exam in Gwadar. There are again possibilities of this factor contributing to the failure of students.

However, there is need for serious action by Education Department, University of Turbat and Gwadar College collectively to dig through the actual reasons of the current issue and to find better ways to avoid such situation in future.