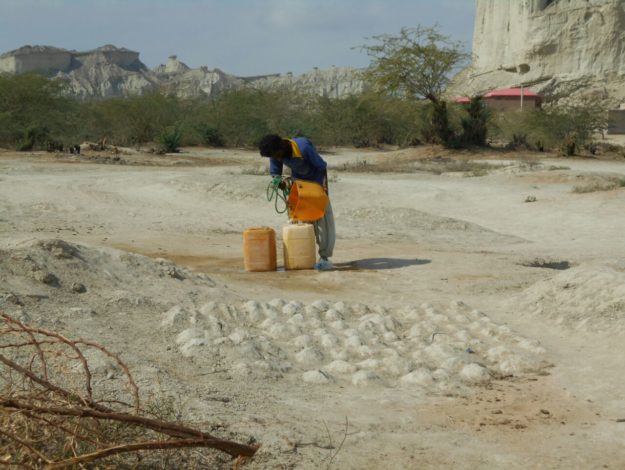 The canal water, being used by the people of Gwadar, is reported to be unhygienic owing to muds and the local doctors have warned of an outbreak of diseases amid deepening water crisis in the port town.

Every day almost 400 water tankers come from Gwadar district to fetch water from the canals in Turbat after the water of Mirani dam, one of the major sources of water supply to Turbat and Gwadar, has almost reached to dead level now. Canals to channelize water for the irrigation of Dasht areas of Turbat are receiving little water from the dam.

This water is being drunk by the people of Gwadar due to an acute shortage of water in the district. Talking to Pak Voices, Dr Imam Alam, a doctor from Teaching Hospital Turbat said, “the unhygienic water supplied to Gwadar may cause people to suffer from jaundice, typhoid and diarrhea. He further suggested people must use only boiling water.

Talking to Pak Voices, “Engineer Fida Ahmed, an Exen of irrigation department of Mirani Dam said,”We are not able to clean the canals as tankers of Gwadar regularly fetch water from it,” adding that they would start cleaning the canals if the tankers stop fetching water, providing them a week time to do the cleaning job.

Mirani Dam was constructed across the Dasht river at the confluence of Kech and Nihang rivers some 30 miles west of Turbat city. The primary purpose of Mirani dam was to store the water of three major rivers of Turbat district so that water stored in dam could be utilized for the irrigation purpose and ensure a constant supply of hygienic water to the areas of Turbat and Gwadar.

It is feared that lack of rain in the Makran region will lead to a certain and massive scarcity of water in the near future. Even though it had rained some days ago in Turbat yet it was not sufficient to provide for the shortage, say officials.

Talking to Pak Voices,” Mukhtar Saleh, an Assistant Director Technical of Mirani Dam, said, “Water of Mirani Dam has reached to dead level but we are compelled to provide water to the tankers who come from Gwadar as there is no other alternative source to get water.”

Answering a question about the report of an unhygienic condition of water provided to the tankers of Gwadar, the official said the provision of water was stopped for just one day to clean it which is insufficient time.

Amjad Ali is working with Pak Voices as a citizen journalist from Turbat district.