There was a lot of trouble with the coronavirus in pregnancy. As soon as my doctor told me to get vaccinated, I went to the vaccination center the next day and got the first dose. 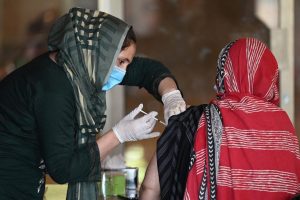 This was said by Amna Imam, 27, who works in an organization working for the disabled and meets hundreds of people every day.

Amna Imam is in the eighth month of her pregnancy and is very happy for her first child. Along with that, she is worried because the nature of her work makes her inadvertently vulnerable to contracting the virus, which can be dangerous for them and their unborn child.

“The Delta variant made me even more worried about what I would do if the baby got infected because of me, what I would feel, I would be responsible for that.”

She says that in the early days of pregnancy, the coronavirus vaccine was not very popular in the country, and even then, the doctor did not recommend it.

<421> These 2 young women lost lives to COVID19. Both were pregnant and not vaccinated as they feared about negative effects on their babies. How tragic! PLEASE NOTE : COVID vaccines are safe in pregnancy. All pregnant should get vaccinated. Not getting vaccinated can be lethal. pic.twitter.com/fsHewsTKUz

Days went by thinking about the disease and its precautions towards prevention. But as research and information about the virus increased, the doctor advised getting vaccinated because the dangers of contracting the virus are potentially far greater than the vaccine.

In Pakistan, according to the National Command and Operations Center (NCOC) website, pregnant and lactating women can get the corona vaccine. But it appears that no official announcements have been made, and many pregnant women are unaware that the vaccine is safe for them.

Most of the pregnant women we spoke to said they did not know about the government announcement, but they got vaccinated on their doctor’s advice, as did Amna Imam.

Sania, who lives in a slum in Islamabad, said she did not even know if a vaccine for pregnant women had been approved.

According to her, when family members declared the vaccine mandatory for employees as well as the rest of the family, she and her family went to a vaccination centre last month, where they were also vaccinated without question.

Sania, who is in her ninth month of pregnancy, said: “I went for my monthly check-up after that, and the nurse said you should not have been vaccinated. But I’m fine, and so far, no side effects have been reported. “

Urooj Ali, a housewife from Rawalpindi, says that she too will see her doctor and if she does, she will be vaccinated.

Urooj, who is expecting her second child in December, said many in her family have been infected with the coronavirus and will not hesitate to get vaccinated because of the close look at the disease.

She says it is unfortunate that many people are still not taking the epidemic seriously and are not vaccinating on their own.

According to government statistics, more than 1.19 million crore cases have been recorded in the country, and so far, more than 20 million people have been fully vaccinated. However, the rate or number of pregnant women or lactating mothers among those who become ill and receive a total dose of the vaccine such statistics are not available in any database.

Last month, two pregnant women who had not been vaccinated died of coronavirus, after which Dr Zafar Mirza, a former health adviser to the prime minister, tweeted: “Pregnant women should get vaccinated.”

Dr Faisal Sultan, Health Adviser to the Prime Minister, to answer the questions as to which vaccine is recommended by the government for pregnant women and lactating mothers and to what extent this proposal has been clarified on the practices of medical institutions. The office was contacted several times, but no reply was received.

However, in a media briefing in August, Dr Faisal said that the government’s proposal for pregnant women and lactating mothers is to get vaccinated.

Society of Obstetrics and Gynecology in Pakistan.

In a position paper, the society stated that pregnant women are at a much higher risk than non-pregnant women due to COVID-19 related diseases. These diseases can lead to hospitalization, transfer to the intensive care unit and even death, “so it is imperative to protect mother and baby from coronavirus.”

According to her, the vaccine’s potential risks far outweigh its benefits, and society recommends a vaccine for pregnant women.

Dr Shafaq Ismail, a gynecologist at Jinnah Hospital in Karachi, the largest government hospital in Sindh, said that since last month, doctors have been recommending pregnant women coming to the OPD to be vaccinated against coronavirus. Dr Shafaq, who has also performed coronary heart disease in Corona patients, said that the vaccine’s benefits far outweigh the risks or complications associated with corona.

“During pregnancy and after childbirth, a woman’s immune system is fragile, which increases her risk of contracting the disease,” she said. In such a case, if a pregnant woman contracts corona, it can be even more dangerous for her.”

Dr Shafaq explained that the pressure on the lungs increases during pregnancy due to the increase in the size of the uterus. If a woman has coronary heart disease and chest infection, it may be more difficult to breathe, which may not. Not only is the mother at risk, but the baby in the womb may also be deprived of oxygen.

She said she also had patients who had to give birth during corona, and some were so ill that they needed a ventilator and could not survive.

Dr Shafaq says that women should get vaccinated against low immunity during pregnancy. Even if they get infected with the virus, the disease will not be so severe due to the antibodies of the vaccine that a hospital or a ventilator will be needed. Can save the life of both mother and child.