Editor’s Note: The writer is Editor, Strategic Affairs and the Executive Director at Center For Research and Security Studies. The opinions expressed in this article are his own.

Despite the exit of Nawaz Sharif, officials and intelligentsia in China remain confident and exuberant about some early harvest projects – energy, transportation and logistics – nearing close to completion in 2018.

They have already begun talking of vigorously focussing on accelerated cooperation in the establishment of an industrial park envisioned under the China-Pakistan Economic Corridor (CPEC). The fast completion of the Free Zone by end of 2017, with more than 30 Chinese companies already registered for setting up businesses there, is likely to attract greater business interest.

Discussions with Chinese officials, businessmen and intelligentsia on China-Pakistan Economic Corridor and One Belt, One Road (OBOR) are often a mix of explicit determination, visible confidence, friendly candour, and measured caution on issues ranging from geo-politics to geo-economics. These interactions also convey a sense of urgency for seamless and faster realisation of President Xi Jinping’s goals; he is known as a go-getter as well as somebody known for his knack for ruthless accountability.

Chairman Mao led us out of the stranglehold of Western powers. So did Deng Xiao Ping, but through the OBOR, President Xi Jinping has designed a modern way of dealing with the circles being laid around China, says a Peking University professor. Most Chinese also love Xi for the massive restructuring of civil-military bureaucracies and his anti-graft campaign that has seen a few thousand people penalised, jailed, dismissed or demoted.

This phenomenal journey from rags to riches, from a rural economy to the status of a global factory of nearly all essentials of life – through a sustained series of policies through multiple five-year plans – has instilled nearly all Chinese with confidence and national pride. They don’t want any hiccups in the way of the consolidation of their economic achievements.

Their message to the outside world is unambiguous; China has a unique political clout and industrial growth model and it continues to develop as a stable country.

It pursues an inclusive, integrated regional and global trade and development… doesn’t believe in militarism and yet cannot overlook the existing and emerging threats around it in the Pacific region and South-West Asia.

Buoyed by mega economic growth that has catapulted China into its current geo-political relevance, many Chinese sound confident and candid like never before. They insist the USA has lost its once unparalleled hegemony and Washington must accord the respect and recognition that China deserves as the second largest economy. 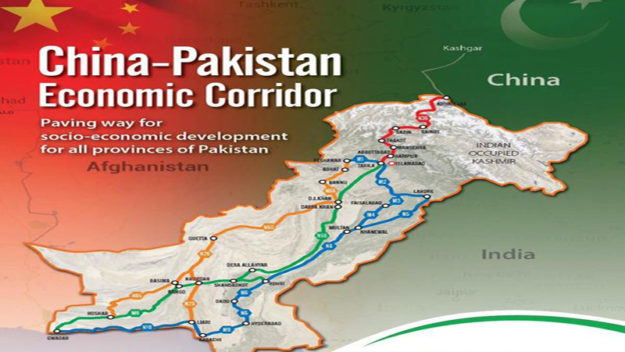 Since CPEC constitutes an important plank of China’s 13th five-year plan, discussions on this undertaking are not only reassuring for Pakistan but also highlight at least four major policy considerations in Beijing.

Firstly, friendship with Pakistan remains unflinching and above any political or economic considerations.

Second, a majority of Chinese thinking community believes that despite their positive public posturing on CPEC and OBOR, USA and Japan will do anything to disrupt and scuttle these initiatives.

Third, India’s choice of association with the USA and Japan and its open disapproval of the CPEC (Modi statement during his May 2015 China visit) represent a constant negativity in the bilateral relations. India is welcome to join OBOR initiatives but if chooses the other way round we have no problem with that. Security and foreign policy experts in Beijing and Shanghai believe India treats south Asia as its territory and therein lies the justification for its opposition to the CEPC.

Fourth, Afghanistan is being used as a launching pad for imposing a new cold war on neighbouring countries to the north (Central Asia, Russia, China) through non-state actors under the garb of al Qaeda, ETIM, Daesh, inter alia.

Fifth, Pakistan also faces a similar situation, with non-state actors every now and then ratcheting up violence to project it as a terror-stricken country and thus unworthy of engagement.

But so runs the narrative in Beijing, we will not let that happen. The latest testimony to that resolve was the Chinese foreign minister’s support to Pakistan during his phone call to US Secretary of State Rex Tillerson.

What do the Chinese expect from Pakistan in return? They want to hear a clear-cut political and economic strategy. Don’t allow your inter-party differences, personality clashes or regional conflicts to pull you down or block our way forward, is the advice.

This advice has a background; many Chinese officials and intelligentsia still recall Imran Khan picking on the Sharif family for alleged corruption in CPEC-related projects. They expect Pakistani politicians not to drag China or CPEC into the national discourse on corruption and to speak in unison on the benefits of this partnership.

One Pakistan veteran, a Beijing-based professor, cautions Chinese and Pakistani business partners not to sacrifice international best business practices for the sake of quick money.

Don’t dump obsolete technologies in Pakistan, warned another Chinese academic, during a discussion with representatives from private and public businesses. We must take all political, social and ecological concerns being raised in Pakistan into consideration, he said.

Another warning relates to the “mismatch” of governance systems, insufficient institutional capacities in Pakistan. Faster implementation will for sure depend on the smooth, coordinated planning and an ease-of-doing-business regime. It also highlights complaints of tardy governmental response and red-tapism within Punjab, Sindh and Islamabad bureaucracies.

In brief, the message out of Beijing is of unwavering friendly political and economic commitment and the expectation of Pakistanis is to play their cards well. And indeed, the onus seems to be on them for reassuring China that Pakistan is totally consensual and united on its partnership with the “strategic iron brother”.

Originally, this article has been published in The Daily Times on August 27th, 2017 and republished on PakVoices with permission.