Hindu Pilgrims board on a small boat to attend the three-day festival of Shadu Bella Temple, which is situated on an Island in Indus River near Sukkur, in Sindh province of Pakistan.

The temple is said to be established in 1823 by Swami Bankhandi Maharaj, who migrated from Nepal and settled in this part of Sindh province.

It is believed that the saint spent 40 years worshiping the goddess of food Mata Anporna, who blessed the land with abundant food.

The saint is revered by the Hindu community throughout Sindh and even in India, attracting a large number of pilgrims from across the border.

But this year was different as no pilgrim from India was seen at the festival, apparently, due to visa issues in the wake of renewed hostilities between India and Pakistan.

The three-day festival at the temple concluded today in which Hindu pilgrims from Sindh and South Punjab performed the rituals.

Here are some of the images capturing the colorful festivities of the Hindus, a minority community in Pakistan:

Dharminder Balach is working with PakVoices as a citizen journalist from Rahim Yar Khan. He traveled to Sukkur to report on the festival for PakVoices. 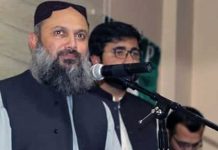