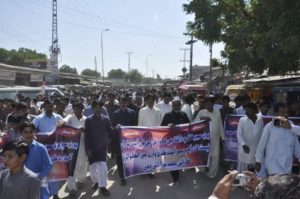 Local council members, students along with their parents and civil society took out a rally last week in Tharparkar against the leak of medical college admission test (MCAT) papers. Retired teachers and educationists announced to challenge the test in the Supreme Court of Pakistan. The protestors demanded the Chief Minister Sindh to take immediate notice and re-arrange the test.

CM Sindh, on the other hand, has taken notice of the situation. According to a statement, a notification to this effect has also been issued. Sindh Health Department on the directives of the Chief Minister has constituted an inquiry committee to probe the improper conduct of public sector medical colleges and universities’ entry test conducted by the National Testing Service (NTS) at various centers.

The committee will present its report within 10 days. The NTS was mandated in 2007 to administer academic performance evaluation tests for students seeking admissions to education institutions, especially universities. Later, the organisation’s services were also acquired for hiring in government departments.

The alleged leak of the paper has sent a wave of disappointment among thousands of students. During the rally, NTS was accused of leaking the paper one day before the test for admission in Liaqat University, Mithi.

Students at the rally demanded, “Corrupt mafia inside NTS has played the role in leaking the paper and they have made millions of rupees,” adding that merit has been compromised, affecting the bright students by putting their future at stake.

They further demanded to cancel the test and set a new date as soon as possible. The students threatened to continue the sit-in unless immediate action is taken.
Prof. retd. Ramo Mil Milani held a press conference at Tharparkar Media Cell against the leak of MCAT papers. Addressing, Milani said, “The government should immediately take action and a new date for the test be announced otherwise we’ll take the matter to Supreme Court.”

Prof. Milani challenging the NTS said,” Nine questions were out of the syllabus, that shows the dishonesty of NTS.” Accusing the NTS further, he said,” Question paper was out one day before the test and Rs. two million per paper was collected.”