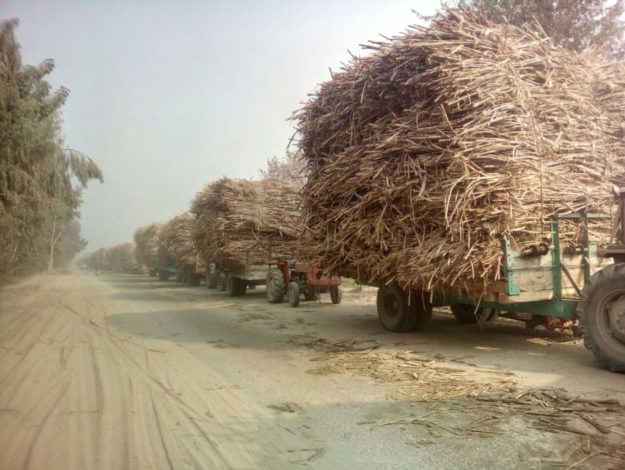 It is easy to visit moon or mars in this modern era but the city of Layyah district has literally become inaccessible in the winter season especially for the last three years, since the boom in sugarcane crop in Layyah city of southern Punjab.

The sugarcane farmers and the commuters of Layyah city both are in real trouble but the district administration is unmoved. Earlier the farmers complained that the sugar mills administration was not paying them the government’s fixed rate i.e. Rs 180 per 40 kg. Now they have concerns about not getting indent (permission or pass for selling the crop to sugar mills) timely to sell their crop.

The late issuance of indent is causing a snarl-up on each side of the city. The miles-long queues of sugarcane loaded tractor trollies have literally blocked the entry and exit points of the city.  Every day there is the worst traffic jam — a trend which is continued since last three years ever since the district has witnessed a growth in sugarcane farming.

According to Agriculture department of Punjab government, the sugarcane crop in Punjab province is being cultivated on total 1.957 million acres in the year 2016-17 whereas last year it was 1.74 million acres. Similarly, its production has also increased from 25080 kg to 25800 kg per acre.

The official data by the Directorate of Agriculture, Crop Reporting Service Punjab shows that Dera Ghazi Khan division is growing sugarcane crop on 248,000 acres out of Layyah is producing sugarcane on 32,000 acres.

The district administration instead of sugar mills owner blames the farmers for this traffic mess. District Coordination Officer (DCO) Layyah Syed Wajid Ali Shah claims that farmers are wholly responsible for this situation. He says that without getting any indent from the sugar mills they simply load their crop and park their tractor trollies on roads for many days until they get a pass.

“The district administration is ensuring strict implementation of government’s fixed rate. Initially, there were complaints of low prices, but after the Chief Minister Punjab’s directives the sugar mills administration is paying Rs 180 per 40 kg. The issue of traffic jam will also be resolved soon”, commented the DCO.

Manzoor Elahi a small-scale farmer from Basti Shahpur while talking to Pak Voices said, he has shifted from cotton to sugarcane. However, he said the farming is becoming difficult profession given the current circumstances and facilities provided to the farmers.

“Previously, I used to grow cotton and wheat on my land (ten acres) but the input cost was much higher compared to cotton prices. I have shifted to sugarcane as the profit margin in this crop is higher than cotton.”

“Since last three year, I am growing sugarcane and wheat crop simultaneously on the same land. This year I fear my wheat crop will not be as productive as it should be because of delay in sowing wheat as the sugar mills started its crushing season very late”, he said.

Talking about the delay in issuance of indent, he said the farmer is being oppressed from the government as well as mill owners. Sugarcane is a year-long crop and the farmers have to irrigate the crop whole year which means it’s an expensive crop.

If the farmers don’t harvest the crop timely the sugarcane weight starts reducing due to extreme cold weather. This is the reason the farmers harvest the sugarcane as early as possible. Another reason for early harvesting of sugarcane is that farmers have to sow wheat in late November or early December. But due to the delayed operation of sugar mills, the farmers are facing double losses, he said.

Syed Nadeem Abbas Kazmi resident of Kotla Haji Shah (an area adjacent to sugar mills) says the entire Basti turns into a jail in the winter season since last three years. The whole road has been occupied by the sugarcane loaded tractor trollies and people cannot even move within the Basti.

“I am a kidney transplant patient as well as have acute asthma problem. The heavy traffic cause dirt pollution in our area. Last winter I had acute lungs infection and was about to die. My brother called rescue 1122 to take me to the hospital.”

He further adds, “It took almost three hours for the rescue ambulance to reach our Basti which is only three kilometers from the city. We have protested time and again and demanded the government to build an alternate road for these tractor trollies but the government is silent on it.”