On Tuesday, people in Gwadar city observed a complete shutdown to protest against the unending crises of water and electric power, on a call by All Parties and Traders Association.

All day little traffic was seen in the city, as all shops, banks and trade centers remained closed.

The shutter down strike was announced by the Traders Association and All Parties Gwadar, after the failure of talks with the administration on the current water crunch and power outages.

It must be noted that Gwadar is facing acute shortage of water and incessant power outages have added to the woes of the public.

Last week the public and All Parties’ workers blocked the main road to the port and demonstrated for two consecutive days against the ongoing water and power crises in the city.

But according to the eminent leaders of All Parties, no progress has been made towards resolving the crises. Hence they have called for a shutdown again.

The public is facing the acute shortage of water and unannounced power outages even in the holy month of Ramadhan.

On Monday, the residents of old Gwadar, Mullah Kareem Bukhsh Ward, and Sheikh Omer Ward which lies adjacent to Gwadar port protested against the crises by burning tires on the road. A large number of women and children also took part in the protest.

On the other hand as an emergency measure, the Gwadar administration has succeeded partially in restoring the Karwatt Desalination Plant and Singhar Plant to ease the water crisis.

The administration had claimed that these measures would alleviate the water crises to a broader scale, but seemingly, the water crisis lingers on.

Balach Qadir is working with PakVoices as a citizen journalist from Gwadar. 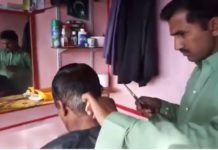