Home Culture Akhateej, A festival of farmers in Thar desert 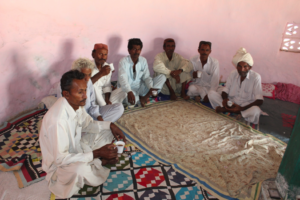 Tharparkar is known for celebrating festivals with full zeal and enthusiasm before the start of monsoon season. “Akhateej” or “Festival of Farmers”, is one of the famous festivals celebrated in Thar desert.

Akhateej (Akha means grains, Teej means the third day of Besakhi or April) festival is celebrated by beginning the day by cooking a sweet dish which is also shared among neighbors and eaten together.

Women are seen carving on their home yards where they put Thari grains. If in case, a farmer’s home yard has no grains, then it is the responsibility of the neighbors to arrange grains for them. 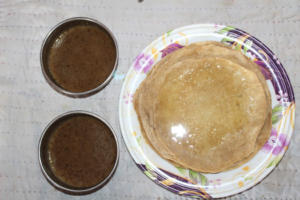 The festival of farmers is celebrated the day after Akhateej. On this day, the farmers get up early in the morning and see the grains in the fields. They do predictions by getting the sense of seasons, winds, and colors of leaves of trees, languages of birds and movement of animals to return back to their homes.

After reaching back from the fields, the farmers set a plan of gathering which is called ‘Rihan’.

All farmers share their opinion with one another regarding the clues of nature while eating pure cooked meals and drinking tea which is served after the main meal. The farmers make four small pots of clay, each of which is given a Hindi calendar name, Akhar (June), Sawan (July), Badho (August) and Aso (September). 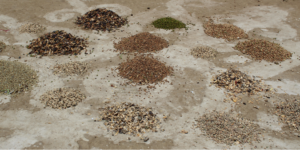 They pour water into each pot and the pot which breaks spontaneously first becomes a predictor of the month in which strong monsoon rainfall will occur.

As the livelihood of people in Thar largely depends on monsoon and cattle farming, the peasants are eagerly waiting for the rainfall. The once in a year rains begin from the start of June till October. 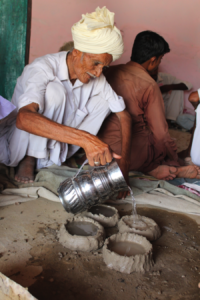 Tharparkar receives roughly 100 mm of rainfall in a year which is enough for agriculture and drinking but due to the lack of resources, it is being wasted in the desert dunes.

Tharparkar is spread over 22,000 square kilometer area and has a 90% population dwelling in villages and hamlets. The main crops of Tharparkar include beans, cluster bean, sesame, pulse beans, nuts and so on.

A scholar Noor Ahmed Janjhi says, “Peasants observe seasonal calendar in Thar. They clean and develop farmlands during the Holi Festival and then they sign during Akhati.”

Farmers and herders check movement of cattle and also of trees, birds and insects. Generally, people of Thar observe sky and atmosphere twice in a day at sunrise and sunset to predict and prepare for cultivation. 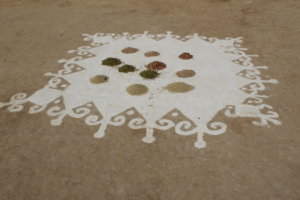 A villager Ragho Meghwar living in Nanisar, which is 10 km away from Mithi, says, “Due to a low rate of crops for selling, Thari peasants are economically weak and do not have any proper access to reach market for buying grains for sowing purpose, therefore they get grains at very high rate.”

He further added that rainfall will occur before the season starts as per his observation.

A Thari folklorist Bharumal Amrani says that Thari folks are close to nature and the festivals of farmers and Akhati are main perspectives of Agricultural societies. The main motto of this festival is to sow the crops and land cultivation but also to cast away evils and abhorrence among farmers.